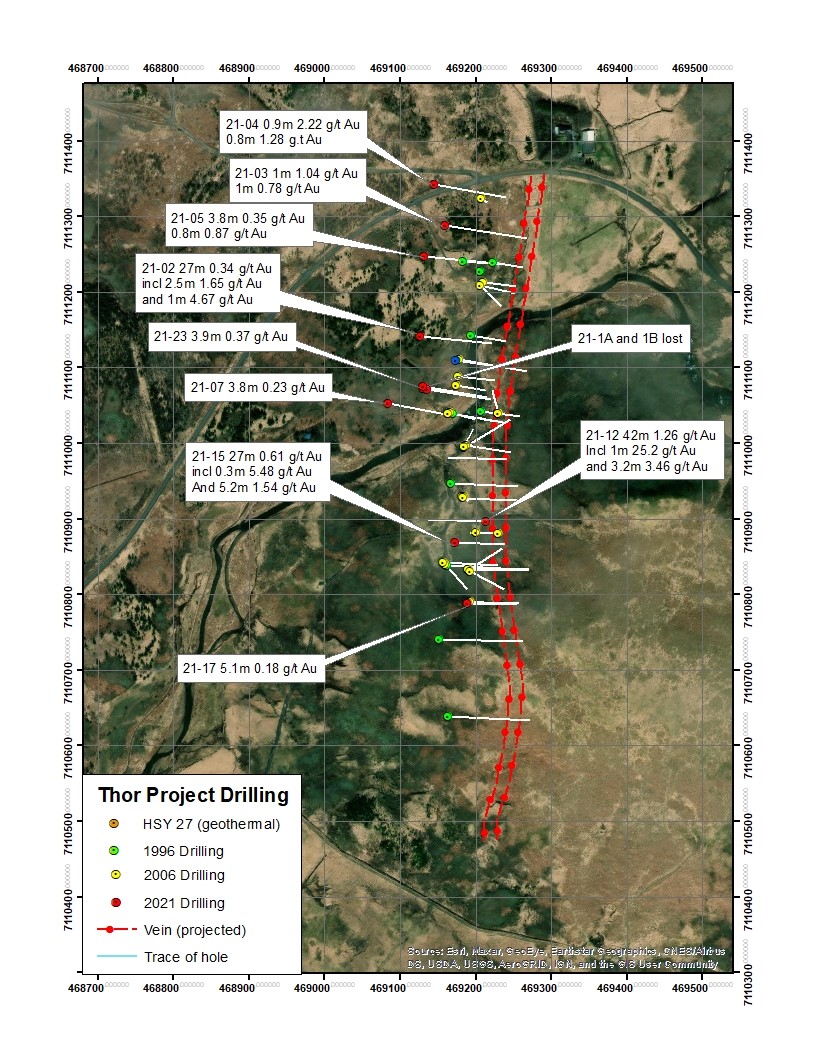 REYKJAVIK, ICELAND/ACCESSWIRE/April 4, 2022/ St-Georges Eco-Mining Corp. (CSE:SX)(OTCQB:SXOOF)(FSE:85G1) is happy to REST an update on the progress of its Icelandic operations. The results of the 2021 drilling campaign on the Thor Gold project are now available and disclosed in this press release. The research initiative to enable on the spot the production of precious metals from geothermal pipes and mine tailings has taken a new step.

The Company’s Icelandic team sought and obtained approval from certain geothermal power producers to access their operations to sample cooling pond effluent and test discharge pipes from several of their geothermal energy production. The sampling effort is expected to begin this week.

Materials collected will be transported to the Company’s metallurgical facilities in Canada to determine the types of minerals present and to explore different potentially cost-effective in situ recovery methods.

Effluents are targeted for their lithium potential, while tailings pond solids and pipe contents are searched for base and precious metals. Seawater-dominated fluid discharges from the Reykjanes subaerial geothermal system in Iceland, where the Company has an interim research license from the Icelandic government.

“There is a sharp decrease in pressure in the surface pipes at an orifice (choke point), and copper-rich scales are deposited at this orifice, consisting largely of bornite and digenite, as well as sphalerite and other sulphides. Bornite and digenite form complex intergrowths with sphalerite and galena, accompanied by high concentrations of gold and silver, up to 590 ppm and 2.3 wt%, respectively.

Other tests reported by ISOR and Reykjavik University on partially mineral-plugged pit scales have historically returned grades of up to 106 g/t gold, 2,743 g/t silver , 12.8% copper, 7.75% lead and 17% zinc. These historical results cannot be independently verified by the Company. However, these publications, along with recent work by its geologists, have prompted management to set aside a significant portion of its Icelandic budget to pursue this opportunity.

“(…) these results are indicative of a potential value for residues and brine discharges in the various geothermal power plants in Iceland. (…) it was the main motivation for the company to seek opportunities in Iceland for almost 15 years now, and it is finally becoming a reality (…)” said Frank Dumas, COO of St-Georges Eco-Mining Corp.

The Company’s 2021 Thor Project drill program has been designed to expand the footprint of the known gold zone along strike and at depth. The map below shows the location of historic drill holes, planned drill holes for 2021 and completed drill holes with associated results.

The Company has received the latest drill results from its Thor 2021 drill program. The highest grades were from hole 21-12, which intersected 25.23 g/t gold (Au) over 1.6 meters with 0.6 meters of core loss. In this zone and on either side of the lost core interval, an interception of 131 g/t over 0.1 meter and 54.9 g/t over 0.1 meter. True widths are not available for this hole.

Other Project Thor results include:

The Thor property hosts several low sulphidation epithermal structures hosting bonanza values ​​in parts of the structures. The 2021 drill program was designed to expand the footprint of the known gold zone along strike and at depth. Due to logistical and weather-related issues, the company was unable to complete its planned +4,000 meter program.

The results of this program have defined an additional advantage for the property by extending to depths of up to 130 meters and extending the zone to 800 meters along strike. The zone remains open laterally and at depth. All mineralization intersected is oxidized to date.

The Company’s best hole was planned as a chisel to the rest of the hole to confirm the dip of the structures and the presence of several gold bearing structures. The hole was drilled subparallel to the structure, which made drilling very difficult. Unfortunately, the hole ended early in a broken quartz vein with modest gold values ​​and failed to fully intersect the zone of mineralization. The remaining holes have been positioned to cut the structure perpendicular or nearly perpendicular and are considered equivalent to the actual thickness.

In addition to the observations above, the program has confirmed the existence of at least two sub-parallel structures with significant gold grades. In the southern half of the project, these structures surround a thick zone of low grade mineralization as defined in holes 21-02, 12, 15 and 17. This may indicate expansion within the structural zone.

The discovery of relatively thick zones of sand (silica has replaced vuggy basalt) and clayey zones adjacent to veins is an important factor in further exploration of the Thor gold system. These zones contain significant gold values ​​of 4 to 15 g/t but are difficult to recover. More important again, the friable nature and permeability of the sands allowed oxidation to occur at depths greater than 130 meters. The oxidation of gold mineralization at Thor will make material processing much easier and environmentally friendly should a mineable resource be defined. To this end, metallurgical sampling of Thor through two drill holes using the PX size or equivalent core will be part of the next phase of drilling. The large sample size will allow for better material recovery and provide a representative sample to test the recovery of gold mineralization.

The Thor system appears to be significantly different in several respects from many low-sulphidation epithermal systems around the world. The silver/gold ratio is less than 1:1. Trace element geochemistry is very low compared to most other systems. Arsenic, antimony, selenium, mercury and tellurium are considered to be present in very low amounts, usually around or just above laboratory detection limits. However, the alteration appears to be consistent with other low sulphidation epithermal systems.

Due to the high core loss within and near the best gold values, future drill programs will focus on larger core sizes and better recoveries in the mineralized zones. A larger core will also provide additional geotechnical and metallurgical information. The company is looking forward to completing the rest of its planned 2021 schedule in its Thor project this year.

“(…) The above results, combined with the 43 historical drill holes and surface trenches, prove that this project and Iceland in general have a significant advantage for gold. The Company intends to build on its substantial database of historical exploration results and expand its future work program with planned infilling and extensions of known zones of mineralization at Thor (…) in parallel advancing its other initiatives in Iceland, working on other licenses, and seeking ways to monetize its share in the Hagavatnsvirkjun hydroelectric dam project currently in the environmental assessment phase (…),” said Thordis Bjork Sigurbjornsdottir, CEO of Iceland Resources EHF, the Icelandic wholly-owned subsidiary of St-Georges Eco-Mining.

The core was cut in half in the field and brought back to the Icelandic Resources Research Center in Reykjavik. The core was photographed, then half of the core was bagged and shipped to ALS Laboratories in Ireland for processing. Blanks and standards were inserted at intervals of approximately 20 to 30 meters for each hole. The remaining core is available for inspection at the Research Center.

The technical information contained in this report has been reviewed by Herb Duerr, P.Geofor St-Georges Eco-Mining Corp.

ON BEHALF OF THE BOARD OF DIRECTORS

St-Georges develops new technologies to solve some of the most common environmental problems in the mining sector, including maximizing metal recovery and complete battery recycling. The Company explores for nickel and PGEs on the Julie Project and the Manicougan Project on Quebec’s North Shore and has several exploration projects in Iceland, including the Thor Gold Project. Based in Montreal, St-Georges shares are listed on the CSE under the symbol SX and trade on the Frankfurt Stock Exchange under the symbol 85G1 and on the OTCQB venture capital market for US and international start-up and development companies. . Companies are up-to-date with their declarations and submit to an annual verification and management certification process. Investors can find real-time quotes and company market information at www.otcmarkets.com

The Canadian Securities Exchange (CSE) has not reviewed and accepts no responsibility for the adequacy or accuracy of the content of this release.