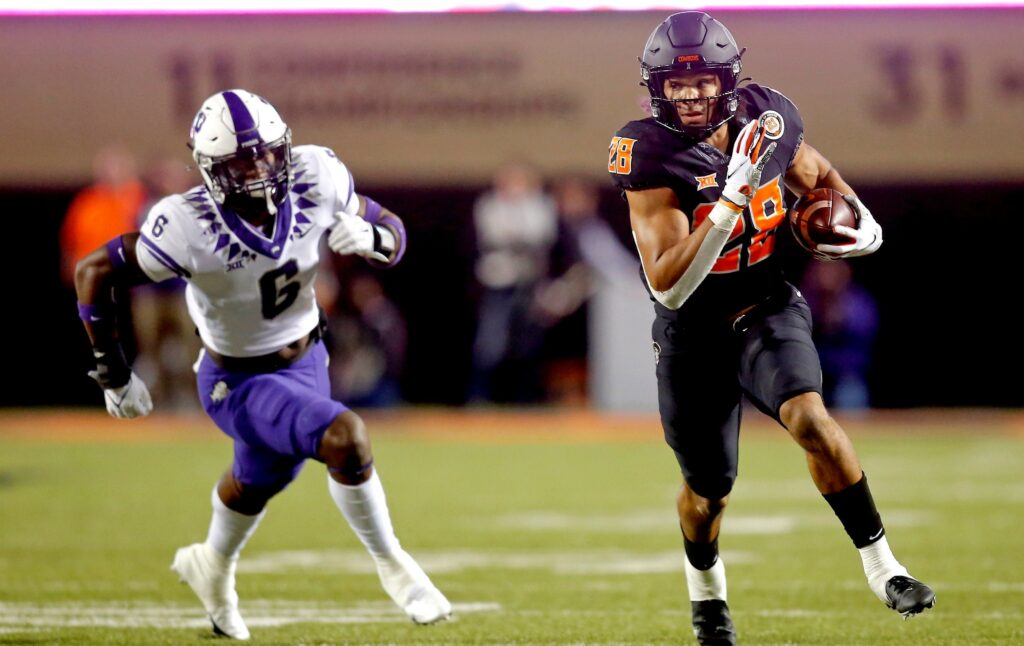 If you’re looking for the best NCAAF predictions for the Oklahoma State vs TCU game, look no further! – Vegas Odds got you covered.

This Week 7 game features a clash between the Cowboys 5-0 and the Horned Frogs 5-0.

Oklahoma State is just as tough this year

After finishing last season with a 12-2 record and the No. 7 ranking in the nation, Oklahoma State is off to an equally strong start this year. Again, defense has been major for them, a rarity for the Big-12 conference, which has given the Cowboys the edge over the competition the past two seasons. That being said, there seems to be some defensive regression from last year. They gave up 44 points to Central Michigan in Game 1, and more recently 31 points to Texas Tech. Nevertheless, they are 5-0 to start the year.

When the defense floundered, they were bailed out by senior quarterback Spencer Sanders, who currently ranks 19th in the nation in QBR. Sanders is having another solid year, with a 12-2 TD/INT ratio through the air, as well as 6 touchdowns on the ground.

Oklahoma State will need both offense and defense to be at their best against a scorching TCU team that has played the ranked team killer for the past few weeks. It’s only the second road game of the season for Oklahoma State, and their toughest test yet.

The Horned Frogs are off to their best start since 2017. They improved to 5-0 this season with a 38-31 road win over #19 Kansas. The win follows a 55-24 victory over then-ranked No. 18 Oklahoma. Although projected to finish 7th in the conference by the Big-12 preseason media poll, TCU is claimed as the best team in the conference so far. In terms of rankings, that honor belongs to Oklahoma State, which TCU will have the opportunity this week to defeat and pass directly.

TCU is led by senior quarterback Max Duggan, who is having his best season yet. Duggan has improved his numbers every year with the Horned Frogs. He’s taken that to a new level this season, currently ranking 5th in all QBR college football. Duggan completed over 73% of his passes, with a TD/INT ratio of 14-1. WR Quentin Johnston, who is currently being projected as a 1st round pick in the 2023 NFL Draft, had a huge game against Kansas, finishing with 14 catches for 206 yards and a touchdown.

The winner of this game will become the favorite to win the Big-12 conference, and likely close to a top-5 finish. Both teams are capable of winning, but recent performances by the Horned Frogs have me leaning in their direction. TCU’s embarrassment at Oklahoma and road win over Kansas proved they have what it takes to beat ranked teams, and an Oklahoma State defensive team shouldn’t not be different. Home advantage is the icing on the cake for the Horned Frogs, who I see improving to 6-0 here.

Apixaban versus rivaroxaban in patients with atrial fibrillation and valvular heart disease: a population-based study: Annals of Internal Medicine: Vol 0, No 0