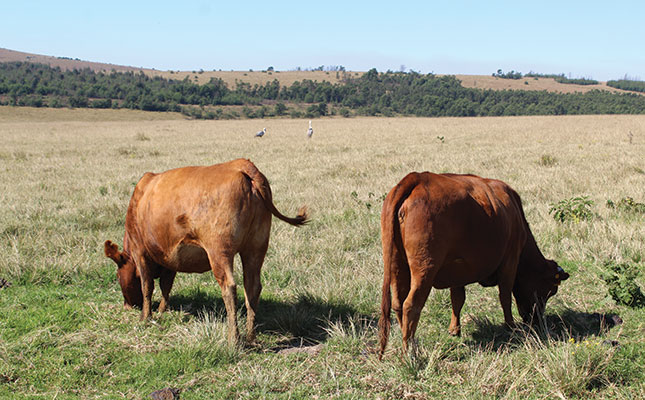 Robert and Sanele Khumalo, second and third generation beef producers, operate a farm in Elandsfontein, near the Mooi River in KwaZulu-Natal. Their farm covers 256 ha, with an additional 300 ha leased to accommodate their herd of 600 Beefmaster X Brangus cattle.

The Khumalos are hands-on herders and carefully manage the feeding, breeding and herd health of their animals. This has seen them build and maintain a sustainable operation despite recent challenges, the main ones being too much rain and too little land.

Elandsfontein receives plenty of rain, providing decent grazing for most of the year. While this rain is obviously welcome, the Khumalos need to pay close attention to the nutrition of their livestock to ensure peak performance. 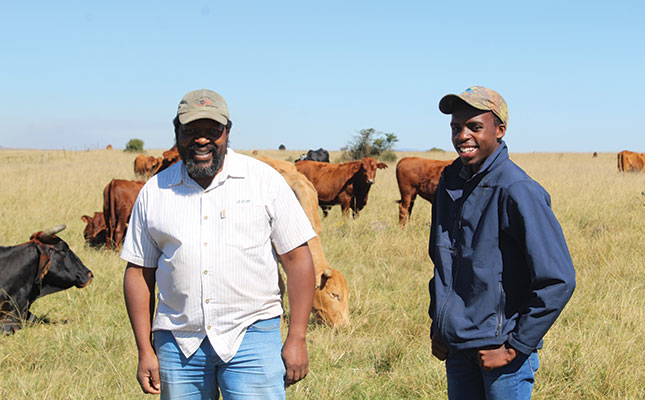 The farm is divided into camps, the density of settlement varying according to the quality of the pastures. Generally, however, Khumalos follow a rate of 1 MLU/ha, increasing density when rainfall has been particularly good and decreasing to around 1 MLU/1.5 ha under relatively dry conditions.

The length of time cattle are kept in each camp before being moved depends on the relative height and condition of the grass. Sanele spends a lot of time in the veldt to assess her condition.

“In the summer, we rotate the cattle every two weeks because the grass grows very quickly after being grazed. In winter, the period the veld needs to recover is longer. Keeping an eye on grass length is important to ensure the veldt is not overgrazed,” he says.

The farm has a mixture of sweet and sour veld. There is no planted pasture, but 40 ha are planted with corn silage as a supplementary feed in winter. The Khumalos plant silage in early December and cut it in May, then feed it mainly to weaned cows.

“Last summer we had so much rain that we had to dip the cattle more often against diseases, especially liver fluke. This drove up our drug bill, affecting our bottom line.

In the summer cattle are usually soaked fortnightly, although last year this figure increased to once a week.

To make the process less stressful and less dangerous for the animals, Robert replaced the dipping method with an innovative spray system, where the animals simply parade through a corridor equipped with spray nozzles. This is particularly useful in the case of pregnant cows, which risk injuring their unborn calves by jumping into a dipping tank.

Sanele notes that stress plays a major role in the overall health of livestock and that reducing stress load is vital for a thriving herd.

Commenting on the recent increase in rainfall, Sanele says the effects of climate change are becoming evident on the farm and pose one of the biggest challenges they face.

“Planning the production season has become difficult because the weather is very capricious. You can’t plan too far in advance. Besides the high rainfall, it also comes later [in the year]resulting in a lot of frost in the morning.

“The winters are also much colder, which influences the way we manage the calves. We have had to set up calving camps for the winter in warmer areas of the farm, and we need a lot more food during this time to get the calves and their mothers through. So we try to stick to a summer calving season when more food is available.

The right breed
Robert grew up among his father’s Nguni herd, and today a handful of the fine speckled cattle can still be seen in the Khumalos herd.

“They’ve been around since my dad’s time, so they’re quite old, but I like to keep them as a reminder to me and my sons of where we all started. They’re part of our family history.

Although sentiment may be behind the retention of the few Nguni cattle, it was sound business principles that prompted Robert to expand his herd with Beefmaster and Brangus crosses.

A building contractor by trade, Robert saved to buy his first herd of cattle in 2001. These were mostly Beefmaster-Bonsmara crosses. He then added a Brangus component to increase the physical size of each head of cattle to get more kilograms of meat per animal. After weighing the pros and cons of each breed, he finally settled on a Beefmaster-Brangus cross.

“This cross produces a decent sized frame, and they gain weight quickly, giving me more meat. The Beefmaster adds more beef while the Brangus adds length. The cross also allows for good milk production in cows, so the calves have a lot more growth potential.”

Plus, it has a good feed conversion rate, which makes it attractive for feedlots.

When selecting bulls, Robert looks for a long straight line on top, a wide mouth and strong legs. It is important that the bulls are not too big or too heavy for the cows when mating.

Sanele adds that improving a herd also includes replacing underperforming cows. The Khumalos work closely with their vet during calving season to ensure the cows are in good shape and the season is running smoothly.

Heifers are bred at 18 months, up from 24 initially, as the Khumalos prefer to put their heifers into production earlier. Sanele explains that this decision was also made because the heifers come into heat at 18 months and become restless, jumping the fences to reach the bulls.

“Putting them into a camp made sense and was a lot easier than trying to separate them.”

A ratio of one bull to 25 cows is used. There are also a few spare bulls to ensure mating can continue if there are problems with a bull. Robert uses his own bulls to tend the cows, buying a new bull each year, depending on auction prices. He sets a limit on what he can spend to avoid reducing his return on investment.

The cows are placed in the camp with the bull for three months, starting on November 15, and the bulls are removed on February 15. With this program, all the cows calve within three months of each other and in the summer when the pasture is good. This in turn ensures that cows can produce enough milk and that weaning rates will be adequate.

The Khumalos are aiming for a conception rate of 92%, but only reached 79% last year. This, however, was no worse than most other farmers in the region, as animal health generally suffered due to heavy rainfall.

Calves are weaned at eight months between 240 kg and 260 kg, and Robert decides which will be sold to feedlots and which will be used as replacement animals. For this selection process, Robert appreciates the advice of Sanele and a group of farmers in the area, and they all discuss the matter together.

All cows, regardless of condition, are replaced when they reach eight years of age.

The next generation
Robert considers himself lucky to have a son on the farm and another who will join them after school is finished. Sanele grew up alongside her father, spending all her free time on the farm, and has been a full-time farmer since enrolling at Weston Agricultural College two years ago. Despite the industry’s many challenges, there’s nothing else he’d rather do.

He admits that while being a third-generation farmer has its perks, such as generational knowledge, having two people farming the same land can be difficult.

“We are from two different generations and have different ideas. But I’ve discovered over the past two years that nothing beats experience. I learned a lot at school, but when I came back to the farm, I saw that the theory didn’t always correspond to what was happening on the ground.

Robert went to great lengths to instill the importance of agriculture in his sons.

“Too many people are fleeing agriculture and leaving the country. who will take [their place] and supply food to South Africa? If there is no agriculture, there is no future. We see countries across Africa where food production is limited and people are hungry and poor. We need all the farmers we can find.

Lack of affordable land
However, he deplores the rising cost of inputs and the lack of land available to develop production.

“We have to give up a lot of heifers that we would prefer to keep because the farm is at capacity. Without more land, we cannot expand the herd and ensure the cattle are in top condition. Stocking rates influence conception, calving and weaning rates, which ultimately affects the bottom line. But there is simply no land available, and when there is, it is very expensive. With my sons joining the business, it is especially important to expand the farm to ensure there is space for everyone to spread their wings.

The Khumalos note that the scarcity of land is also impacting the transformation of the industry.

“Those who have tried to get started on state-provided land are struggling because they don’t have tenure, so they can’t get a loan to start production.”

He adds that much of the land owned by the government is lying fallow, and because it’s not offered for sale, it’s just going to be wasted.

“At one point, 54 farms were leased by the state in this area. We have seen many farmers arrive, try, but struggle to succeed without capital or loans. »