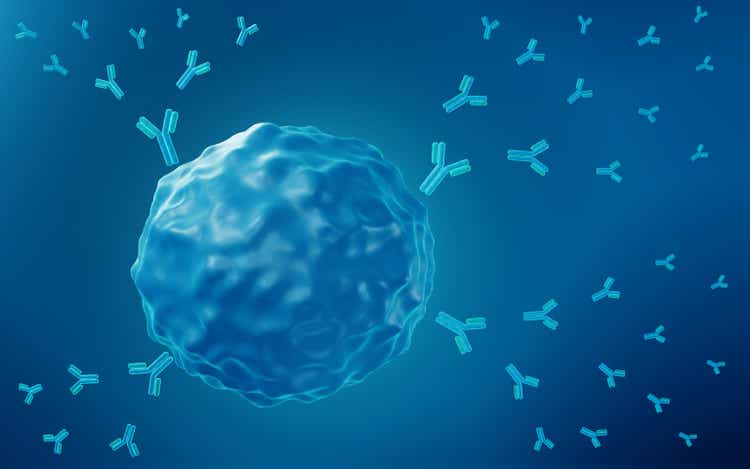 I covered Adaptimmune Therapeutics (NASDAQ:ADAP) several times before. ADAP is a leader in TCR therapies that has seen better days and may see better days in the years to come. However, this year is not This year.

With the success of SPEARHEAD, afami-cell may well become the first FDA-approved T cell therapy in a solid tumor indication. The main concern is durability. Afami-cell has shown an excellent response to treatment so far. They saw a response rate of 34%, well above the 18% threshold, so if the lower bound of the confidence interval can be higher than 18%, they have a high chance of success. The problem, as I said, is durability.

As I noted in the previous article:

Another one [positive] the angle with durability is Data of the SURPASS trial presented at the SITC last year. Data show that adding an AKT inhibitor (AKTi) when making afami-cel (ADP-A2M4) can reshape gene expression towards better proliferation or cytotoxicity, which may increase the durability of the response. These next-generation SPEAR-T cells have enhanced memory and higher proliferation when AKT signaling is inhibited during ex vivo T cell expansion, all within the controlled manufacturing process. Post-infusion analysis then showed that “ADP-A2M4CD8 SPEAR T cells made with AKTi demonstrated higher median persistence in peripheral blood of patients in the Phase 1 SURPASS trial, in peak vector copy number and in percentage of maximum recovery, compared to those made without.” Yes, all of this data needs to be translated into a full-scale clinical program, but the data presented dispels some of the sustainability concerns.

Updated data from this trial was announced just a few days ago. The data showed:

The study enrolled 44 patients in the US, Canada and EU who had received a median of 3 prior lines of treatment and yet had progressed to advanced metastatic cancers. They received a single dose of ADP-A2M4CD8, and 43 were evaluable for efficacy as of August 1.

Data from the ongoing trial indicate an overall response rate of 33%, including two cases of unconfirmed partial responses.

The median duration was 12 weeks and the disease control rate was 86%, while five patients had confirmed clinical responses, including one complete response.

A subset of 25 patients with ovarian, urothelia, and head and neck cancers demonstrated a 44% response rate.

Of the notable adverse events, 32 people (73%) had cytokine release syndrome (CRS), with the majority of events resolving and categorized as low grade (~86% ≤ Grade 2). However, there have been two deaths related to ADP-A2M4CD8.

However, the problem is that this is for future trials; the current trial does not have the SURPASS benefit, and the BLA that will be filed this year may have durability issues. However, as fierce biotech noted last year about this lawsuit:

Adaptimmune said 75% of responses are ongoing, with durations ranging from four to 65 weeks. Biotechnology considers the interim data “encouraging” and has not yet reached the median duration of response.

From their last company presentation, I see that the median duration of response or mDOR was 52 weeks. I also note that only 1 in 10 MRCLS patients actually had a treatment response in the pooled data of 69 patients with synovial sarcoma or MRCLS who received afami-cell in the phase 1 trial and cohort 1 of the SPEARHEAD-1 phase 2 trial. Response improved by 25% in the Phase 2 SPEARHEAD-1 trial.

Another concern with the BLA is the actual market. The indications are going to be synovial sarcoma and myxoid/round cell liposarcoma or MRCLS. Even together, these two markets are very small, and the actual earning potential is less than a hundred million dollars.

According to a The source:

The incidence of synovial sarcoma has been estimated at 2.75 per 100,000. The majority of cases involve the lower limbs. About 800 new cases occur in the United States each year, and this tumor accounts for about 5-10% of all soft tissue sarcomas.

According to another The source:

So, taking the two together, there are no more than 1,000 patients in the US each year, and even with 10% penetration at launch, we’re only seeing 100 patients treated. Of course, being an orphan drug, afami-cell can be very expensive; however, even so, the market does not exceed $100 million. And that’s if you’re feeling optimistic. However, keep in mind that this will be the first modified T cell therapy to hit the market in a solid tumor indication. This is just the start of the game here for Adaptimmune, if all goes well. Only the first generation MAGE-A4 platform can have 40 times more targeted patients according to their latest business platform.

At the end of the line

ADAP has a difficult cash position, despite plans to file a BLA this year. There are many reasons for this. One is the small market size of its immediate indications. The second concerns sustainability issues. The third is security; there have been two patient deaths in its trials so far, both related to the treatment. Taking all these elements into account, ADAP remains moderate despite being a leading company in the TCR. However, more clarity around the BLA could change all that.

About the TPT Service

Thanks for reading. At Total Pharma Tracker we offer the following:-

Our Android app and website has a set of tools for DIY investors, including software in development where you can enter any ticker and get extensive curated research material.

For investors needing hands-on support, our in-house experts scour our tools and find the best investable stocks, complete with buy/sell strategies and alerts.

Sign up now for our free trial, request access to our tools and find out, at no cost to you, what we can do for you.