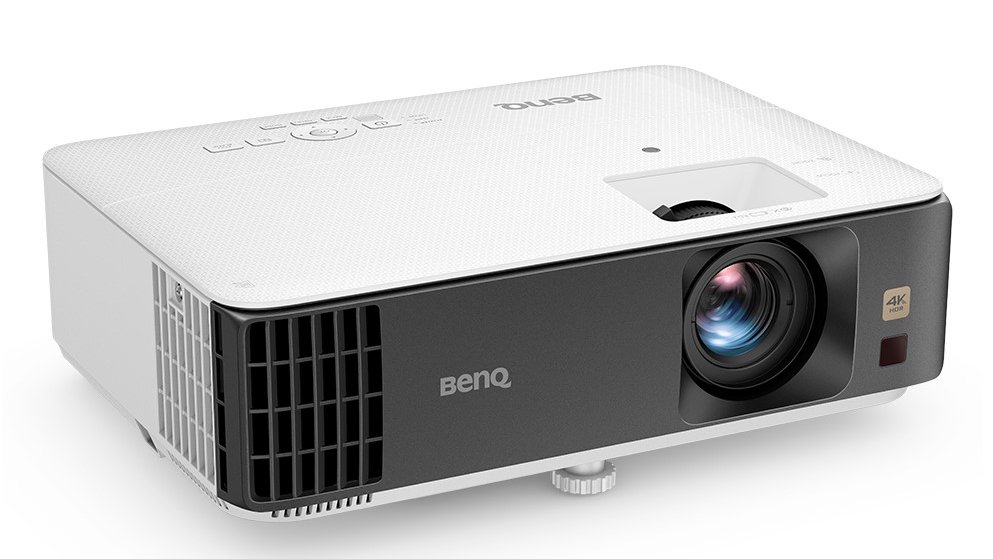 It looks like 4K gaming projectors are finally taking off. 4K-capable DLP chips have reached the level where you can stick them in a projector that costs more or even less, and the projector’s HDR just keeps getting better. Meanwhile, new graphics cards and the PS5 and Xbox Series X have the power to make 4K gaming worthwhile.

While projectors such as the BenQ TK700 are undoubtedly a luxury – with 4K HDR monitors and TVs available for much less – nothing beats the experience of playing today’s hit titles at scale. Even VR games aren’t as immersive as playing games like Halo Infinite or Elden Ring on a monster 100-inch screen.

READ NEXT: The best 1080p and 4K compatible projectors to buy

BenQ TK700 review: What you need to know

The TK700 is a 4K projector intended for complete entertainment and especially for games. Like most 4K projectors at this price, its 0.47-inch DLP chip doesn’t support 4K resolution natively; instead, it uses a pixel shift technique to simulate the same effect. However, BenQ claims that by moving the chip’s 1920 x 1080 pixels horizontally and vertically at 240Hz, it actually puts 8.3 million pixels on your screen, earning it a “True” designation. 4K”.

Its gaming features include a special Game HDR mode, low input lag and a response time of 16.67ms at 60Hz. The BenQ TK700 also has two HDMI 2.0b sockets for your consoles, a audio return channel support, 30-bit color and a maximum brightness of 3200 ANSI lumens.

It can’t do 4K above 60Hz, but it can do 1080p at 120Hz. Otherwise, it has just about everything a gamer could want while ticking most of the boxes for movie buffs. BenQ claims it hits 96% of Rec.709 gamut and can handle both HDR10 and HLG.

The BenQ TK700 costs just under £1000, at which price the main competitor is the Optoma UHD38. It has the same 4K resolution as the BenQ, refresh rates of up to 240Hz, response times as low as 4.2ms, and a peak brightness of 4,000 ANSI lumens. However, 240Hz is only intended for PC gaming at 1080p resolutions, as is response time; you’re watching 120Hz on the PS5 or Xbox Series X.

Otherwise, you might want to consider a big-screen 4K TV, and especially a TV with gaming-friendly features like HDMI 2.1, 120Hz playback and variable refresh rate support. The 65-inch LG 65NANO866NA and Samsung Q65 can be had for under £1000, and what you lose in size you gain in detail, functionality and HDR brightness levels. Don’t get me wrong: gaming projectors are awesome. It’s just that a TV performs better in a wider range of lighting conditions, and will generally get the most out of any game that goes big on HDR.

The TK700 is a fairly compact unit with a 312 x 256mm footprint and a black and white two-tone body. The top contains all the basic controls and provides access to the zoom and focus wheels, so you don’t need to panic every time you temporarily misplace the remote (provided your projector isn’t ceiling-mounted ).

The sockets are all on the back, including the two HDMI 2.0b ports, an RS232 connector, a single USB 2.0 port and a 3.5mm audio output. One of the HDMI ports also handles eARC for connection to a 7.1 audio system or soundbar. Our review model even has a special compartment and a third secret HDMI input to install BenQ’s QS01 Android TV dongle, which we recently saw bundled with its GV30 laptop. It’s not bad, but you get a better user interface and a wider range of streaming apps with a Google TV, Roku or Fire TV stick.

The unit sits on four legs, which unscrew to increase the projection angle, and the BenQ TK700 has excellent 2D keystone distortion to straighten the image if you need to project from above, below or from the side. Meanwhile, the 1.127-1.46:1 throw ratio gives you a screen size of up to 100 inches from 2.5m or 150 inches from 3.75m. That’s actually better than the Optoma UHD38, which needs 3.3m to reach 100 inches. I tried the TK700 in a few positions in two different rooms and always found it easy to get a good, sharp image with minimal setup.

The remote is fine but the layout isn’t particularly intuitive and it lacks the backlight of the UHD38’s remote. Early in testing, I had to keep turning on the lights just to see what I was doing, although I learned where the buttons were over time.

As a gaming projector, it’s hard to fault the TK700; it has much the same strengths and weaknesses as the very similar UHD38. The image is crisp and highly detailed, the colors are rich and vibrant, and the HDR effects are pretty convincing, although you’ll never get the same deep black and eye-popping highlights from a projector that you’re going to get. a QLED or OLED TV screen.

Why? Well, remember that the 3200 lumens is what comes out of the projector, not what bounces off the projector screen. In testing, I measured brightness levels up to 277 cd/m2, but with a black level of 6.81 cd/m2, up from the lowest 2.11 cd/m2 I observed. when adjusting. Achieving those levels involved switching the lamp from Eco to Normal and adjusting the HDR brightness and brightness levels up and you can’t have the brightest whites and darkest blacks at the same time.

It doesn’t look ideal on paper, but in practice the picture looks fantastic, especially in games as rich in color and detail as Destiny 2: The Witch Queen and Elden Ring (both on PS5). Any lag is virtually indistinguishable and the image size at 100 inches gives you plenty of leeway to marvel at the stunning world design and artwork. What if you prefer something faster? Well, Call of Duty: Black Ops – Cold War on PS5 runs nice and smooth at 1080p and 120Hz. Given the right conditions and budget, I would play all my games this way.

As well as minimizing input lag, Game and Game HDR modes are designed to bring out shadow detail in darker areas without reducing contrast, and it seems to work. Whether venturing underground in Elden Ring or investigating the deepest and creepiest spaces in The Witch Queen, I was able to see my way and approach enemies with ease.

If you’re more interested in watching movies or streaming the latest hot series, there may be better options, like BenQ’s own W2700 or the Optoma Cinemax P2 (although the latter is more than double the price). Yet even here the TK700 performs well, handling the big action scenes of Thor: Ragnarok and the Snyder cut of Justice League with great vigor and tackling the vivid colors and period detail of The Marvelous Mrs Maisel. with such skill. You won’t get the darkest black or the brightest HDR highlights, but you’ll get a big and exciting picture.

Two other things surprised me. The first is that the TK700 has built-in sound and is definitely worth using. There’s no stereo separation, which is going to be a problem in many action games, but there’s plenty of volume and what’s there sounds decent, with a strong low end and detail respectable. I happily played Destiny 2 and Elden Ring without plugging in headphones or a soundbar, and disgruntled family members asked me to turn the volume down.

The second is that high light levels make the TK700 usable in the daytime. Sure, you lose a bit of contrast, which makes it difficult to do much in the darker dungeons of Elden Ring, but otherwise it’s fine. Plus, the projector is still usable in the Smart Eco setting, which doubles the normal lamp life of 4,000 hours without reducing brightness levels to a silly extent.

Only two things spoil the good vibes. First, when testing with a Roku 4K Streaming Stick, I found that plugging it into HDMI 2 resulted in an odd, slightly darker poster image on the right side of the screen. There was no sign of this with other sources, however, or with the Roku stick connected to HDMI 1. Second, I found the notorious rainbow effect a little more noticeable with this projector than with the Optoma UHD38. It was by no means a constant concern, but it is something to be aware of if you are sensitive to it.

We previously had the UHD38 as the best 4K gaming projector for under £1000, but the TK700 gives it stiff competition. The Optoma has a slight edge on brightness, but otherwise they’re neck and neck, and the TK700’s shorter reach and easier setup might tip things in BenQ’s direction for some buyers, as will the Optoma. its practical integrated.

You can’t really lose by going with one or the other, and if you want to take your gaming experience to a whole new level, the BenQ TK700 is a fantastic buy.

NCSW working to increase female quota to 10% in police