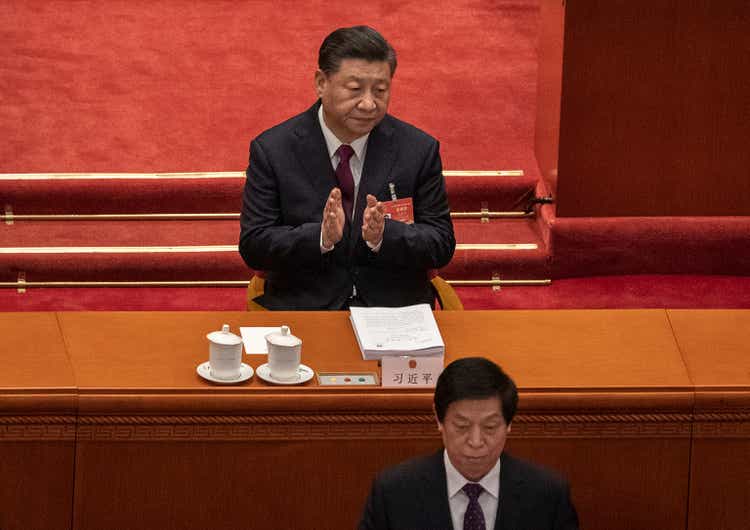 China’s economy and real estate market have yet to bottom

This article was originally published on February 18, 2022 under Tri-macro search.

According to Bloomberg, in an internal document cited last week by the South China Morning Post, the CEO of China Vanke said the company was in a “life or death battle” and “on our last legs.” Vanke is one of China’s strongest and most financially significant property developers. This is a sign that companies in worse financial situations will likely find themselves in default. I think this is especially true for those who have a lot of USD-denominated offshore debt but earn income in Yuan or RMB.

I have already explained my problems with China’s macroeconomic stability. In summary, Chinese growth since 2000 has been very robust. This is largely because China’s monetary authorities have embarked on massive stimulus measures focused on infrastructure, construction and supply. This required huge amounts of credit in the economy. Early on, returns on investment, i.e. growth, were strong enough not to push corporate debt/GDP to high levels. Due to the increase in the incremental capital generation ratio or the effect of diminishing returns from supply-driven growth and construction models, each increase in RMB debt no longer creates a corresponding amount of economic growth. to compensate for it. Essentially, the model has become inefficient. Demand from the economy, especially consumer demand, has also not been strong, meaning growth is dependent on business and corporate investment. The widely used statistic for this in Chinese economic data is Investment in Fixed Assets or FAI.

The large amounts of ISPs have also created an overcapacity problem. China has also used the creation and construction of a huge supply side of the economy to drive the demand side of the economy. through increased employment and demand for commodities, among other channels.

I think it’s unwise to call a bottom in China’s housing market and growth, until we see the global effects of Fed tightening and capital flows into the USD from the currencies in emerging markets, thus aggravating the problem of USD-denominated corporate debt in emerging markets. The PBOC needs to relax to stimulate demand in the economy and guide the economy through a hard landing, but lower rates can lead to capital outflows from the economy and the currency. I expect Chinese capital outflows to increase here. One of the main reasons is that when the Fed raises US rates and the PBOC lowers Chinese rates, the yield differential – or the Chinese 10-year bond yield minus the US 10-year bond yield narrows. or could reverse.

I don’t think China can avoid recession (if it isn’t already – official statistics are uncertain) without lowering interest rates. The most recent inflation data from China was 0.9% year-on-year, compared to 7.5% in the United States. This signals weak demand in the Chinese economy, but Chinese rates and yields are higher than those in the United States. I don’t think this can continue and as central banks adjust policy I would expect the divergence between the PBOC and the Fed to lead to downward pressure on the yuan compounding the offshore debt problem USD-denominated Chinese property builders. Chinese homebuilders earn revenue in RMB but owe large amounts in USD. This means that when the USD appreciates, the actual debt burden also increases.

I think as China’s near-term economic descent continues and defaults/NPLs and unemployment increase, Chinese banks will become the problem. Chinese banks have granted large amounts of credit and are highly indebted. The banking system is about 200% of the size of the economy, compared to about 65% for the United States. This China hard landing will require lower rates and likely the PBOC to print RMB to recapitalize banks for bad debts to pull through pending consumer rebalancing. One of the main issues will be to prevent unemployment from rising, thereby preventing the rebalancing of Chinese consumer demand away from the supply-driven construction model. China will probably have to rely on strong exports to the rest of the world to maintain its labor market at a good level.

This is a very disinflationary or deflationary scenario for China, and I think the risk aversion sentiment and the resulting declines in financial markets and asset prices will be a headwind for gold. Gold buyers really want the US to enter a period of stagflation where growth slows and inflation stays high. I think we will get the opposite where Fed tightening and China slowdown have a bigger effect on US asset and commodity prices and US CPI than actual economic growth and employment. I’m more on the side of lower asset prices and inflation without killing the recovery or creating a recession. The US economy is doing quite well and can sustain higher rates. Some other economies around the world, such as Hong Kong, tie their monetary policy to the US Fed by maintaining a currency board. If the Fed tightens policy in the United States, policy must also tighten in Hong Kong, but what I mean is what happens if an economy is ready for higher rates and the other is not?

We are still seeing strong real growth with the CPI at multi-decade highs, which means nominal growth is healthy. Businesses have more orders than they can fill, and businesses are seeing higher input costs. This means that, from a price point of view, companies almost have to protect their margins and have shown their ability to raise prices, thus increasing inflation. This is, again, a good sign for aggregate demand in the United States.

Despite high debts, Rajasthan hopes to soon have a silver lining