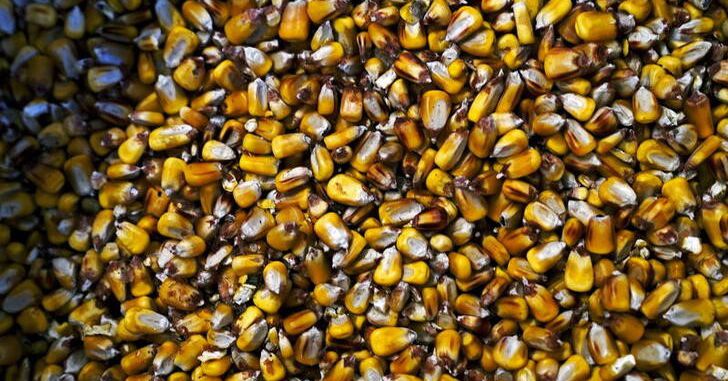 Column: Analysts are playing with a rare scenario for U.S. corn and soybean acreage

FORT COLLINS, Colorado, Feb 23 (Reuters) – Corn has always been the staple crop of the United States.

But U.S. farmers have planted more soybeans than corn twice before, and that possibility is looming for 2022 as soybean prices and corn production costs soar.

However, the classic saying that American farmers “love to plant corn” apparently came true last year, as traditional market signals may have pointed to more acres of soybeans than were showing. was actually planted. High corn prices, which are even higher now, were probably too good to ignore and it could still be the case.

On average, market analysts believe U.S. farmers will plant more corn than soybeans in 2022, but the gap is close. A Reuters poll of 14 analysts this week put corn acres at 91.8 million and beans at 89.2 million, and all but two had more corn acres than beans.

Thirteen analysts see 47.8 million acres of wheat in the United States in 2022, and 11 of the forecasts are higher than last year’s 46.7 million. It’s unclear if analysts have made cuts to other crops to accommodate more corn, soybeans and wheat or if they’re assuming a larger acreage universe.

The U.S. Department of Agriculture feels along the same lines as it projected an increase in acreage in 2022 for the three major U.S. crops in October. This included 92 million acres of corn, 87.5 million soybeans and 49 million wheat.

The USDA will release provisional US balance sheets for 2022-23 on Thursday at 7:00 a.m. EST (12:00 GMT). These will include new acreage estimates derived in a manner similar to those of other analysts, using factors such as the economy. The results of the first US plantation survey will be released on March 31.

Prior to 2017, corn acreage accounted for about 54% of the combined corn and bean total in the United States, which averaged nearly 174 million acres. Falling corn prices and rising Chinese demand for soybeans at the end of 2016 changed the planting potential of the two major US crops.

In 2017, combined corn and soybean acres topped 180 million for the first time as the third crop, wheat, continued to lose ground. Corn acreage narrowly overtook soybeans in 2017, but soybeans took a slight advantage in 2018.

It’s the only time American farmers have planted more soybeans than corn in a natural, market-driven way. Soybean acres beat corn in 1983, but that was because of a government policy to cut corn acres, a decision that backfired due to the historic drought that summer.

The most obvious link between 2017 and 2018 was the high price of Chicago new crop soybean futures versus new crop corn in the months before planting. This new crop ratio, November soybeans to December corn, can often indicate better profitability of soybeans versus corn when the value is around 2.5 or higher.

The ratio averaged nearly 2.6 at the start of 2017 and 2018, and U.S. soybean acreage ended up much higher in those years than ever before. However, an identical ratio in 2021 produced different results.

A CASE FOR CORN?

A year ago, market participants pegged 2021 U.S. corn plantings at 92.9 million acres and soybeans at 89.4 million, which is reasonable given the high ratio of new crops. . But final soybean acres landed at 87.2 million versus corn’s 93.4 million.

The 2022 new crop ratio averaged 2.43 this month, above January’s average of 2.34, out of favorable soybean territory and well below last year. Some analysts discount the influence of the ratio this year due to the increased production costs of corn versus soybeans, a fair argument.

But 2022 will be a real test of how much American farmers enjoy planting corn despite those expensive inputs. Although futures prices suggest soybeans were more attractive than corn last year, analysts may have overlooked grower satisfaction with corn prices.

This year’s contracts are much higher, setting new highs on Wednesday. November soybeans are selling at an average record $14.32 a bushel this month and December corn sits at $5.89, slightly behind the 2011 benchmark of $6.01.

On Wednesday, new crop soybeans were trading 22% higher than the same date last year and new crop corn was up 30%.

There are indications that the mood on social media may have shifted to corn rather than beans since last fall, but much uncertainty remains.

Discussions of high fertilizer prices and shortages that could reduce corn acreage were very important in October. This theme hasn’t necessarily faded, but futures prices are significantly higher now. On Wednesday, 2022 new crop soybeans ended up 21% from the October poll, and new crop corn finished up 16%.

I posted another Twitter poll on Jan. 20 on corn acres, and 61% of 1,086 voters saw corn acres above 91.5 million, with 24% at 93 million or more. I estimated a “commercial average” of about 92 million acres of corn from this survey, which if true would be very difficult to match or exceed for beans.

I did not query soybean acres on January 20, but on February 18 I asked if corn or soybean acres would exceed the other, or if they would be equal. The winner among 998 votes was more acres of corn than soybeans with 36%, but that means 64% saw the chance for beans to match or exceed corn acreage.

New crop corn is up 9% since Jan. 20 and beans have jumped 13%, and it’s clear that recent strength in both has complicated market participants’ acreage ideas. The reduced attractiveness of spring wheat relative to corn and beans could also increase the opportunities for planting the best crops.

Karen Braun is a market analyst for Reuters. The opinions expressed above are his own.

A prudent budget in times of uncertainty