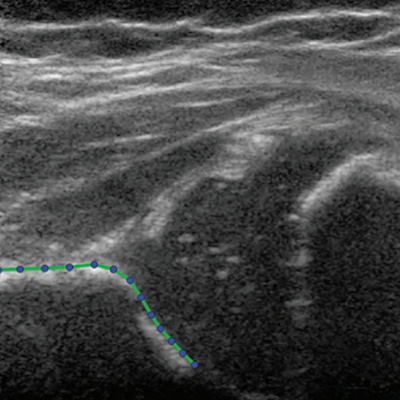 Dutch optimize use of ultrasound to predict hip dysplasia in infants

A team led by Dr. Joshua Bonsel from University Medical Center Utrecht in the Netherlands found that modeling ultrasound images of stable, well-centered dysplastic hips in infants predicted which hips grew to normal or remained dysplastic, and determined which hips benefited from the Pavlik harness treatment.

Developmental dysplasia of the hip is common in newborns, with previous research suggesting an incidence between 1.5 and 20 per 1,000 births. While patients with Graf types III and IV are referred for immediate treatment, there is no consensus on how and when to treat stable well-centered infantile hips with acetabular dysplasia. These hips have a bony roof angle between 43° and 59°, while a value of 60° or more is considered normal.

The researchers wrote that many well-centered stable hips are currently treated with an abduction device despite the possibility that they may develop into normal hips, leading to possible overtreatment.

“Current diagnostic parameters for developmentally stable hip dysplasia correlate only weakly with outcome and cannot be used to identify hips that will have persistent or residual hip dysplasia with or without treatment,” the authors wrote. study authors.

Ultrasound image of the hip in a 3-month-old girl at baseline. No contrast product was used. The presented hip is described with the acetabular shape model, composed of 13 points. The researchers wrote that through statistical modeling of shapes from ultrasound images, hip dysplasia and treatment can be better predicted. Image courtesy of RSNA.

“In the context where approximately 80% of Graf II hips will develop normally without treatment, more data extraction from ultrasound images is needed to identify hips at risk for persistent or residual hip dysplasia at follow-up.” , Bonsel said. and his colleagues wrote.

The team looked at baseline ultrasound image data from 97 infants with an average age of 3.37 years. Among them, 89 were girls and the other eight were boys. The group found 90 cases of Graf type IIb hip dysplasia, 52 of which were treated with the Pavlik harness.

The modeling created several shape modes from the 13 landmarks placed on the ultrasound images of each hip. These modes showed shape variations of the hip shapes on the imaging sets.

The researchers found that shape modes 2 and 3 of the pattern were significantly related to persistent hip dysplasia on ultrasound images, with odds ratios of 0.43 and 2.39, respectively. Mode 2 was also related to residual hip dysplasia on pelvic radiographs, with an odds ratio of 0.09 (p=0.002).

Pavlik harness treatment was beneficial in patients with negative mode 2 values, with an odds ratio of 12.46 (p=0.01).

Bonsel and colleagues called for more studies to validate the predictive value of the identified shape modes. However, they added that an acetabular shape mode may lead to a more accurate prognosis and prevent overtreatment, which could have important medical and socioeconomic benefits.

“In addition, statistical pattern modeling in software could help the examiner identify the ideal projection plane in a series of real-time ultrasound images,” they wrote.

Rating agencies approve of recovery push; eye on the deficit