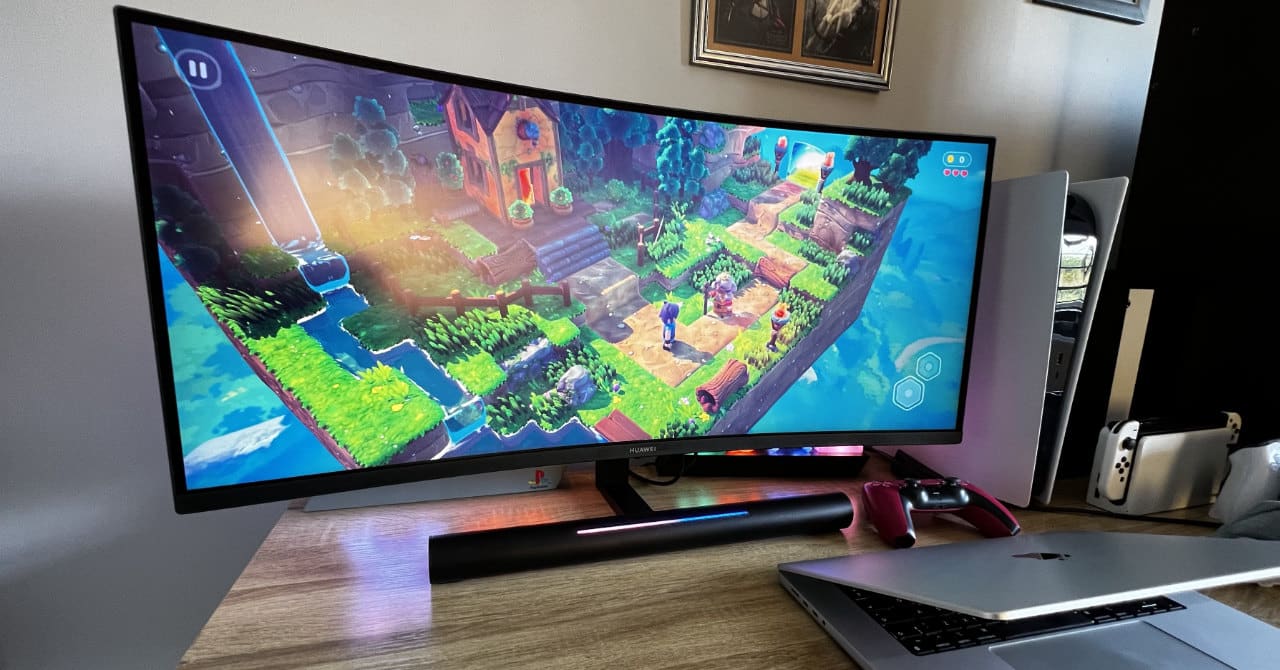 The Huawei MateView GT marks the company’s first major step in the gaming scene. While we shouldn’t expect to see a huge wave of gaming-specific hardware arrive, Huawei says the company wants to offer something for everything. the world and that this monitor is intended for gamers. The Huawei MateView GT has fantastic value for money. It’s probably one of the more affordable 34-inch gaming monitors out there, priced at R13,999.

You can buy other 34-inch monitors for about the same price or less, but the features won’t match this display. Huawei packed in a great soundbar, AMD FreeSync support, and a decent panel with excellent 3440 x 1440p sweet spot resolution. Not only is the Huawei MateView GT a great PC gaming monitor, the latest consoles also perform great here and general daily use was a dream.

In the box there is the monitor, the stand and a box containing all the cables and the instruction manual. I took out the stand, peeled off the plastic, and attached it to the back of the monitor. That was it. There are no screws to tighten, no knurled screws to turn. Nothing like it there. The installation process literally takes 2 minutes and was a snap. On the back of the monitor, I was surprised to see a magnetic face cover that contained all of the ports packed on the device. The magnetic design means it snaps on and off easily and I didn’t have to push or push clips into a slot to keep it in place. Even when I wanted to plug in something else, I just took the magnetic cover off, plugged it in, and snapped it back on. I wish more brands would do this. 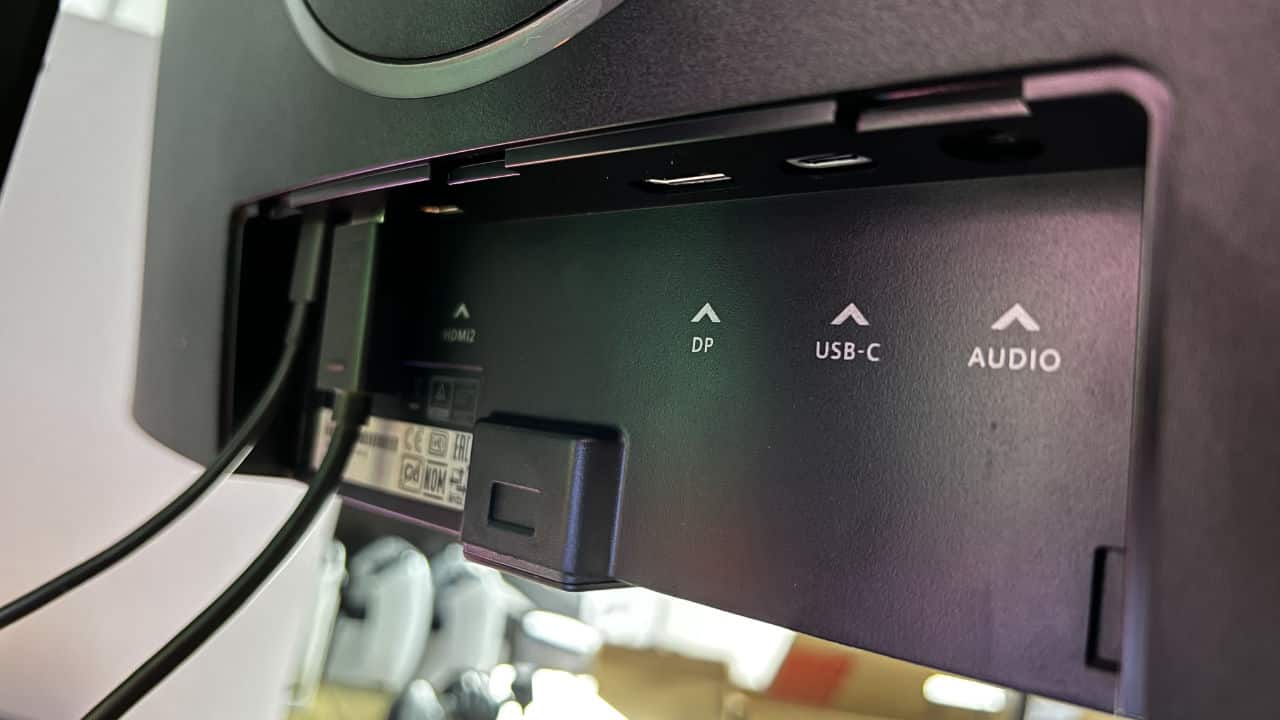 It’s one of the most unique additions to a gaming monitor I’ve seen and, if anything, changes the game a bit. Instead of squeezing mediocre speakers into the back of the panel , this sound bar delivers premium sound while being something you will actually use. The RGB bar is also a touchscreen, so adjusting the sound meant I had to slide my finger up and down on the bar to adjust the volume. As I swiped my finger, the volume input adjusted on the screen in front of me so I could also see what I was doing.

Finally, the screen itself rises and falls on the stand. It can drop to the bottom of the stand near the soundbar or be pushed up to 110mm. The screen also has a 25 degree vertical adjustment but cannot be tiled horizontally. You can also mount the screen, but that means you won’t be able to use the soundbar anymore, so you probably won’t. There is also no cable management. It would have been nice to have a small hole to slide the cables into the back of the stand so they don’t hang down from the bottom. 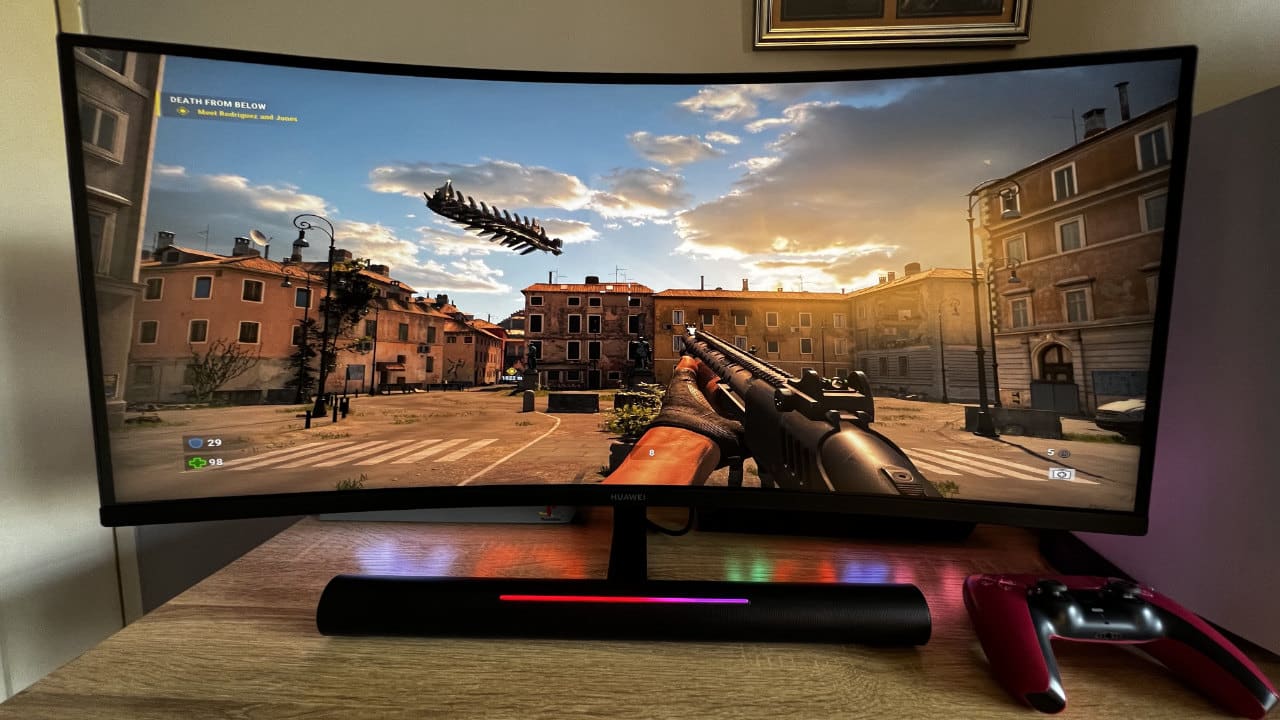 Huawei MateView GT packs a pretty decent VA panel. Of course, there’s nothing high-tech about it like QLED, OLED, or even local dimming, but this is an affordable LED gaming monitor, so it makes sense that the company has kept things to the point. For the most part, the MateView GT offers a great contrast ratio with incredible depth, color gamut, and pretty decent brightness. Unfortunately, while the monitor does support HDR, it’s a fluke in this department. The monitor can only achieve a maximum brightness of 400 nits and with that, a contrast ratio of 4989: 1. This is well below the recommended brightness for enjoying true HDR quality.

The lack of local dimming also means that the difference between SDR and HDR is hard to see. In fact, some of the content looks almost identical. You see, the Huawei MateView GT in SDR achieves a brightness of 305 nits and a contrast ratio of 5120: 1. This means that in SDR the monitor has better contrast than HDR. Sure, the small boost in brightness when HDR is on helps a bit with content, but the monitor falls far short of anything HDR certified from a distance. I don’t know how it even got its certification with 400 nits brightness. 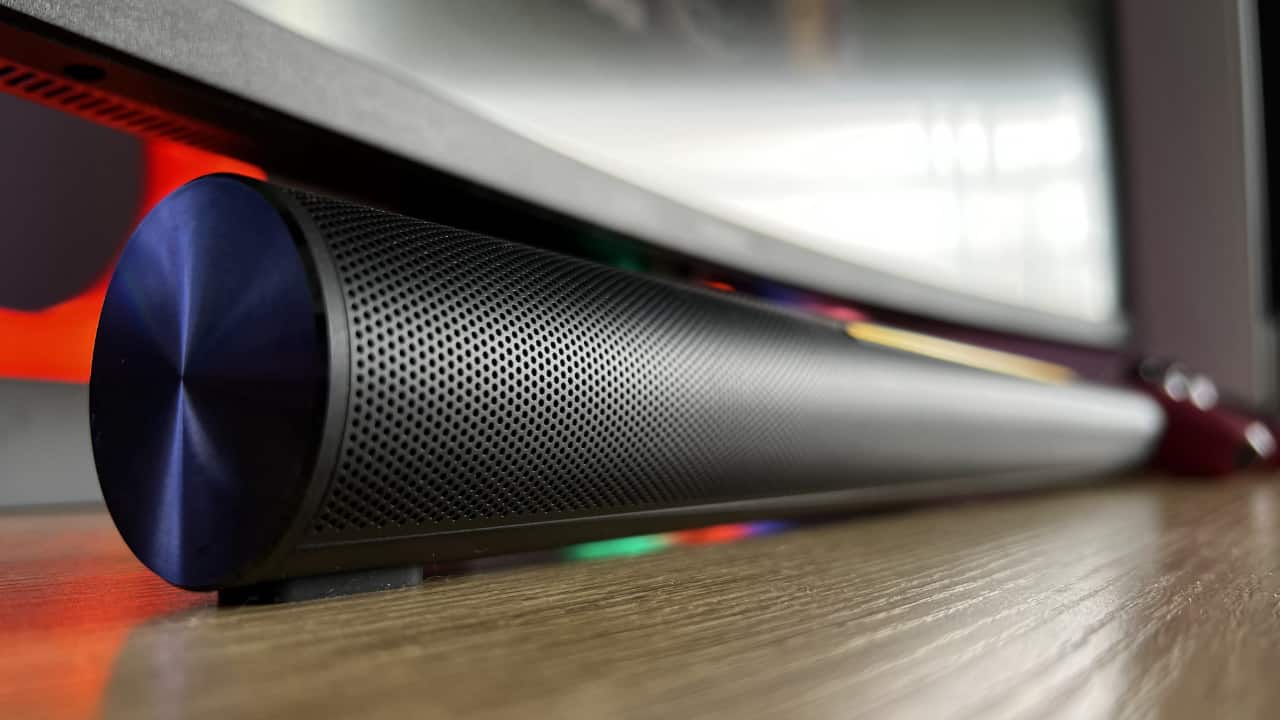 I also had big issues with HDR on this monitor. The display settings often said HDR was off when I connected my Xbox Series X / S and PS5. All consoles kept telling me that the monitor does not support HDR at all. During this time both my PC and MacBook showed it was activated. I couldn’t get HDR to work most of the time and there is no real indication as to why.

In other factors, the Huawei MateView GT has good colors. The screen rendered 99.2% of the sRGB range to 123%. It also displayed 87% of the DCI-P3 range. These readings mean that the games and content will look fantastic on screen, and the content will be accurate as well.

I have to address the blur issues on the Huawei MateView GT. The monitor has a refresh rate of 165Hz and a response time of 4ms. However, this 4ms response time means the picture quality degrades a bit in games. There are black ghost images that appear on most objects when moving the camera around and it kind of looks like a stain. The monitor includes a few Overdrive settings that help reduce this. There are four levels and while they help reduce blur, they don’t reduce response time.

The poor pixel response just isn’t great. This is caused by the VA panel that is being used on the monitor. While most gamers don’t worry too much about this, any type of professional gamer will have to ignore the Huawei MateView GT as a purchase option due to its 4ms response time. 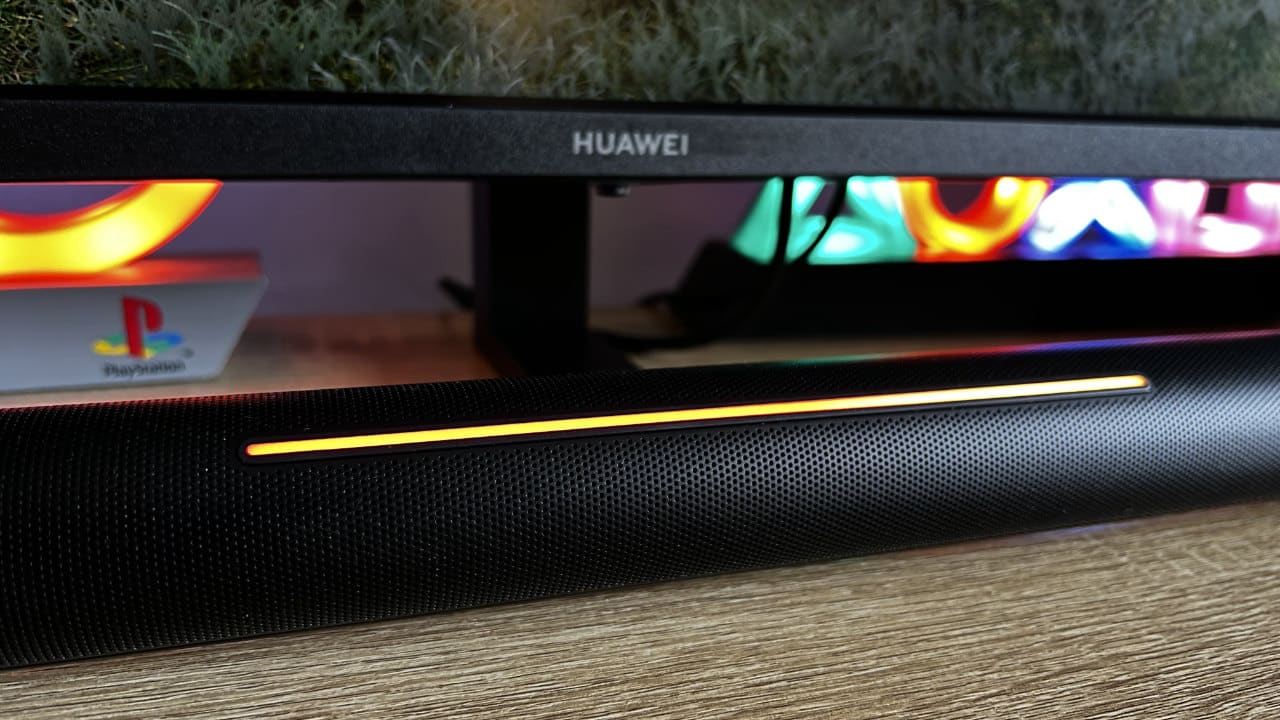 Other than that, the Huawei MateView GT checks most of the boxes for a great gaming monitor. The 3,440 x 1,440 resolution is ideal for most gamers. Anyone with an RTX 2070 will be able to maximize this and the games will be great. It also means that the Xbox Series X / S can pump 120Hz 1440p on some supported games. Unfortunately, the PS5 doesn’t yet support 1440p, so you’ll have to settle for 1080p 120Hz. 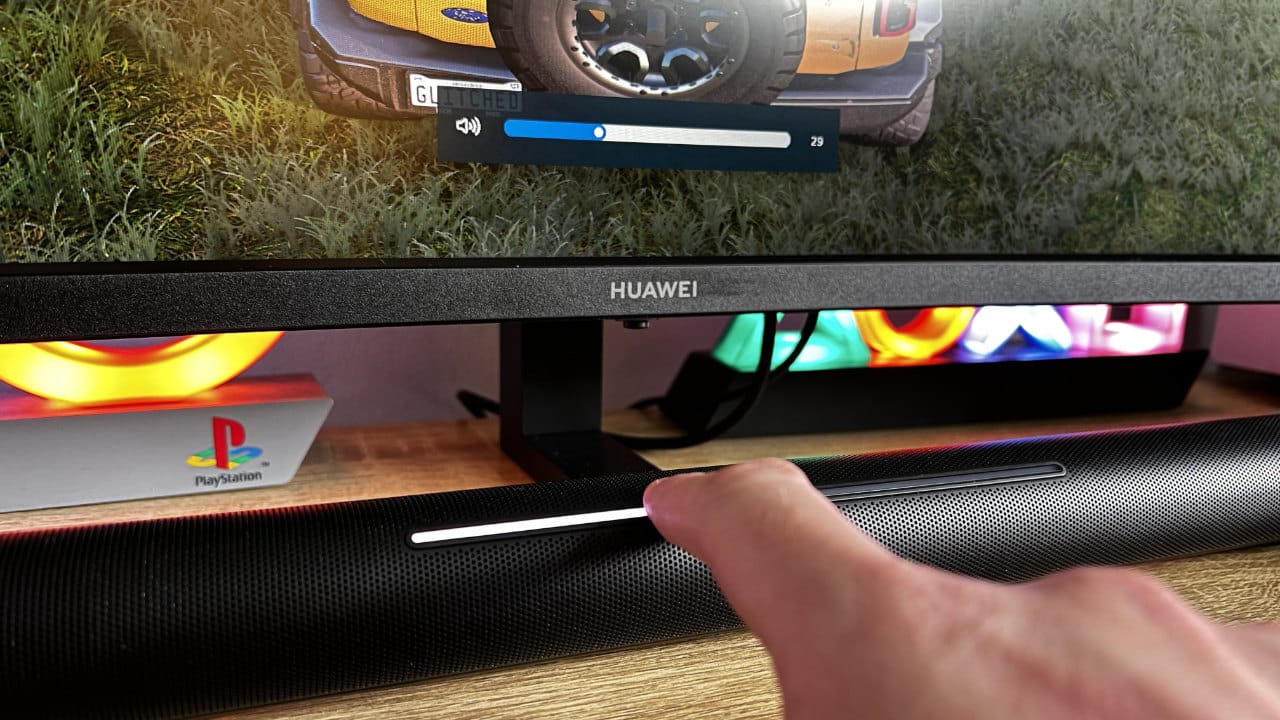 I should also mention that AMD FreeSync is supported by this monitor. However, Huawei, for some reason, doesn’t really advertise this as a feature. In fact, you should also research how to activate the feature. There is no menu for this and an easy way to find the settings. Instead, I had to hold down the joystick menu controller for 10 seconds while pushing it up to activate. I’m not sure why the company doesn’t want you to know that the monitor includes some of the best sync tech.

We also have the Huawei MateView GT sound bar which is fantastic. The bottom of the stand doubles as a powerful, heavy soundbar with a thin strip of RGB on the front. This RGB light also acts as a volume controller. By sliding my finger over it, the volume increased and decreased. The quality of the speakers is correct on this sound bar. It enhances your gaming experience with powerful bass and deep sound. This type of enclosure is also very innovative. This means that you can enjoy your games without an external speaker system and have to wear headphones all the time. The lighting can also be changed. You can increase or decrease the brightness and adjust the animation on the RGB band. These are simple presets, so don’t expect something highly customizable. It would have been nice to sync the tape with the games or have some sort of app to adjust the lighting styles.

There are also two dual matrix microphones on the Huawei MateView GT. These are activated by plugging the USB C cable into a supported PC or mac. Without a camera, this feature is pretty useless for those who want to use the monitor for Zoom meetings. However, players can at least use the microphone for in-game chat. 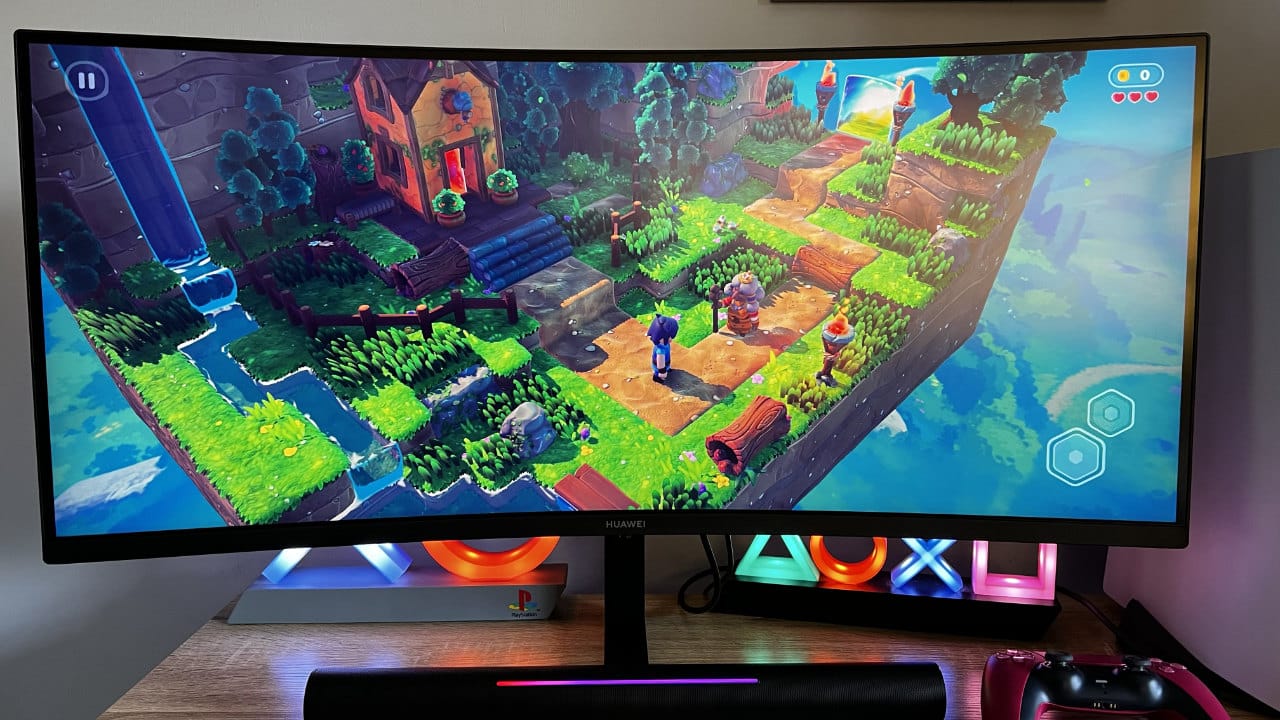 This Huawei MateView GT review is based on a loan unit sent to us. You can find the monitor for R13 999 on Huawei official website here.

+ The sound bar is great

– The response time is not great

Abiraterone acetate and prednisolone with or without enzalutamide for high-risk non-metastatic prostate cancer: a meta-analysis of the primary results of two phase 3 randomized controlled trials of the STAMPEDE platform protocol