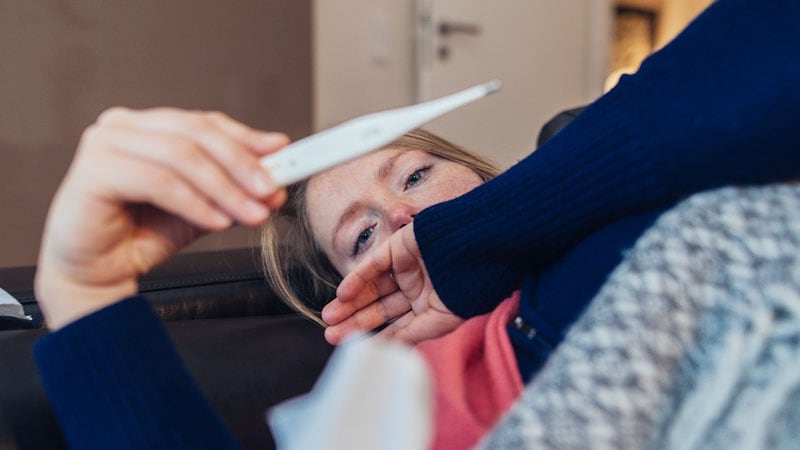 The influenza infection is linked to a subsequent diagnosis of Parkinson’s disease (PD) more than 10 years later, resurfacing a long-standing debate about whether the infection increases the risk of long-term movement disorders. term.

The study was published online on October 25 in JAMA Neurology.

The debate over whether the flu is associated with PD dates back to the 1918 influenza pandemic, when experts documented parkinsonism in those affected.

They matched these subjects for age and sex to 51,355 controls without PD. Compared to controls, slightly fewer people with PD had chronic obstructive pulmonary disease (COPD) or emphysema, but there was a similar distribution of cardiovascular disease and various other conditions.

The researchers collected data on influenza diagnoses in inpatient and outpatient clinics from 1977 to 2016. They plotted them by month and year on a graph, calculated the median number of diagnoses per month, and identified the peaks as those with more than three times the median.

They classified the cases into groups related to the time between infection and PD: over 10 years, 10-15 years and over 15 years.

The lapse of time explains quite a long â€œpreparationâ€ towards PD, Cocoros said. There is sometimes a preclinical phase of several decades before patients develop typical motor signs and a prodromal phase where they may present with non-motor symptoms such as sleep disturbances and constipation.

â€œWe expected there would be at least 10 years between any infection and PD if there was an association present,â€ Cocoros said.

Investigators found an association between exposure to influenza and the diagnosis of PD “that lasted over time,” she said.

For more than 10 years before PD, the likelihood of a diagnosis for those infected versus unexposed was increased by 73% (odds ratio [OR] 1.73; 95% CI, 1.11 – 2.71; P = 0.02) after adjusting for cardiovascular disease, diabetes, chronic obstructive pulmonary disease, emphysema, lung cancer, Crohn’s disease and ulcerative colitis.

In a sensitivity analysis, the researchers looked at peak infection activity. “We wanted to increase the likelihood that these diagnoses represent an actual infection,” noted Cocoros.

Researchers looked at associations with many other types of infection, but didn’t see the same pattern over time. Some infections, for example gastrointestinal infections and sepsis, were associated with PD within 5 years, but most associations appeared to be zero after more than 10 years.

â€œThere seemed to be associations earlier between infection and PD, which we interpret to suggest that there is in fact no significant association,â€ Cocoros said.

An exception could be urinary tract infections (UTIs), where after 10 years the adjusted OR was 1.19 (95% CI 1.01 – 1.40). Research suggests that patients with PD often have UTIs and a neurogenic bladder.

“It is possible that UTIs are an early symptom of PD rather than a causative factor,” Cocoros said.

It is not known how the flu could lead to PD, but it could be that the virus enters the central nervous system, causing neuroinflammation. Cytokines generated in response to influenza infection could damage the brain.

â€œThe infection could be a ‘primer’ or a ‘first’ blow to the system, perhaps preparing people for Parkinson’s disease,â€ Cocoros said.

Regarding the current COVID-19 pandemic, some experts are concerned about a potential increase in PD cases in the coming decades, with some calling for prospective surveillance of patients with this infection, Cocoros said.

However, she noted that infections do not account for all cases of PD and that genetic and environmental factors also influence risk.

Many people who contract the flu do not seek medical attention or get tested, so it is possible that the study counted those infected as unexposed. Another potential limitation of the study was that small numbers for some infections, for example, H pylori and hepatitis C, limits the ability to interpret the results

Commenting on the search for Medscape Medical News, Aparna Wagle Shukla, MD, professor, Norman Fixel Institute for Neurological Diseases, University Of Florida, Gainesville, said the results amid the current pandemic are “exciting and important” and “have rekindled interest” in the role of infection in PD.

However, the study had some limitations, an important one being the failure to take into account confounding factors, including environmental factors, she said. Exposure to pesticides, living in a rural area, drinking well water and having suffered a head injury can increase the risk of PD, while high consumption of caffeine, nicotine, alcohol and nonsteroidal anti-inflammatory drugs may reduce the risk.

The study also did not take into account exposure to multiple microbes or the “burden of infections,” said Wagle Shukla, who was not involved in the current study. In addition, because the data comes from a single country exposed to specific influenza strains, the application of the results elsewhere may be limited.

The study was supported by grants from the Lundbeck Foundation and the Augustinus Foundation. Cocoros did not disclose any relevant financial relationship. Several co-authors have disclosed relationships with the industry. The full list can be found with the original article.