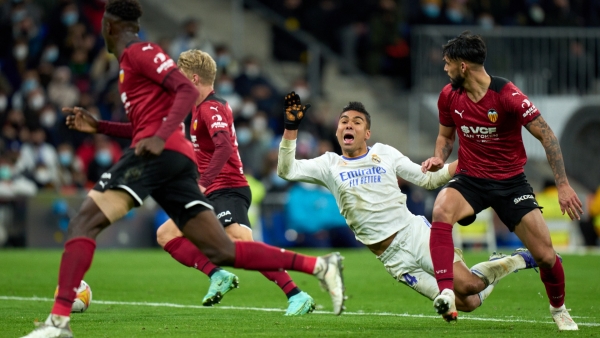 Carlo Ancelotti said the penalty awarded to Real Madrid in their 4-1 victory over Valencia on Saturday “seemed pretty clear” after Los Che’s official Twitter account suggested it was “theft”.

Madrid took the lead two minutes before the break thanks to Karim Benzema’s 300th goal in all competitions for the club, with the France international returning home after Omar Alderete was penalized for a foul in Casemiro’s box.

This led to the publication of Valencia’s Twitter account: “The flight to Madrid is starting to be somewhat repetitive.”

The tweet also tagged Netflix’s hit show Money Heist, which follows a group of bank robbers in the Spanish capital.

Barcelona defender Gerard Pique couldn’t resist getting involved, responding to Valencia’s tweet with the message: “Don’t say too loudly that you are going to be penalized.”

Ancelotti, however, had no problem with awarding the penalty, telling a press conference: “From a distance it seemed pretty clear to me but I don’t know anything else about what’s going on. happened.

“I don’t know what to say. I have to assess the game. We deserved to win and it’s true that the penalty helped us but I think the game was over.”

Madrid sealed a third consecutive La Liga victory over Valencia in the second half thanks to a brace from Vinicius Junior – his fourth brace of the season – and a second goal from Benzema.

Vinicius has been involved in one goal every 101.6 minutes in all competitions this season for Los Blancos (14 goals, seven assists) – his best ratio in a single season for the club.

Despite the duo’s superb form this season, Ancelotti has hinted that he may be ready to shuffle his pack up front in the coming weeks.

“I think we have to think it over game by game,” he added. “Vinicius made a good comeback. He wasn’t very good at dribbling but he was ready to score goals. He scored goals from a forward zone and Karim is still the same.

“We will compete, whether with [Marco] Asensio, Rodrygo or whoever it is. They have done very well. No one is standing still because each game is different.

“Today they played really well, but I also have to think about the other players. We are lucky to have these players who stand out a lot.”

Madrid will be next in action on Wednesday when they face arch rivals Barcelona in the Supercopa de Espana semi-final.

An algorithmic method to identify epidemic waves of COVID-19