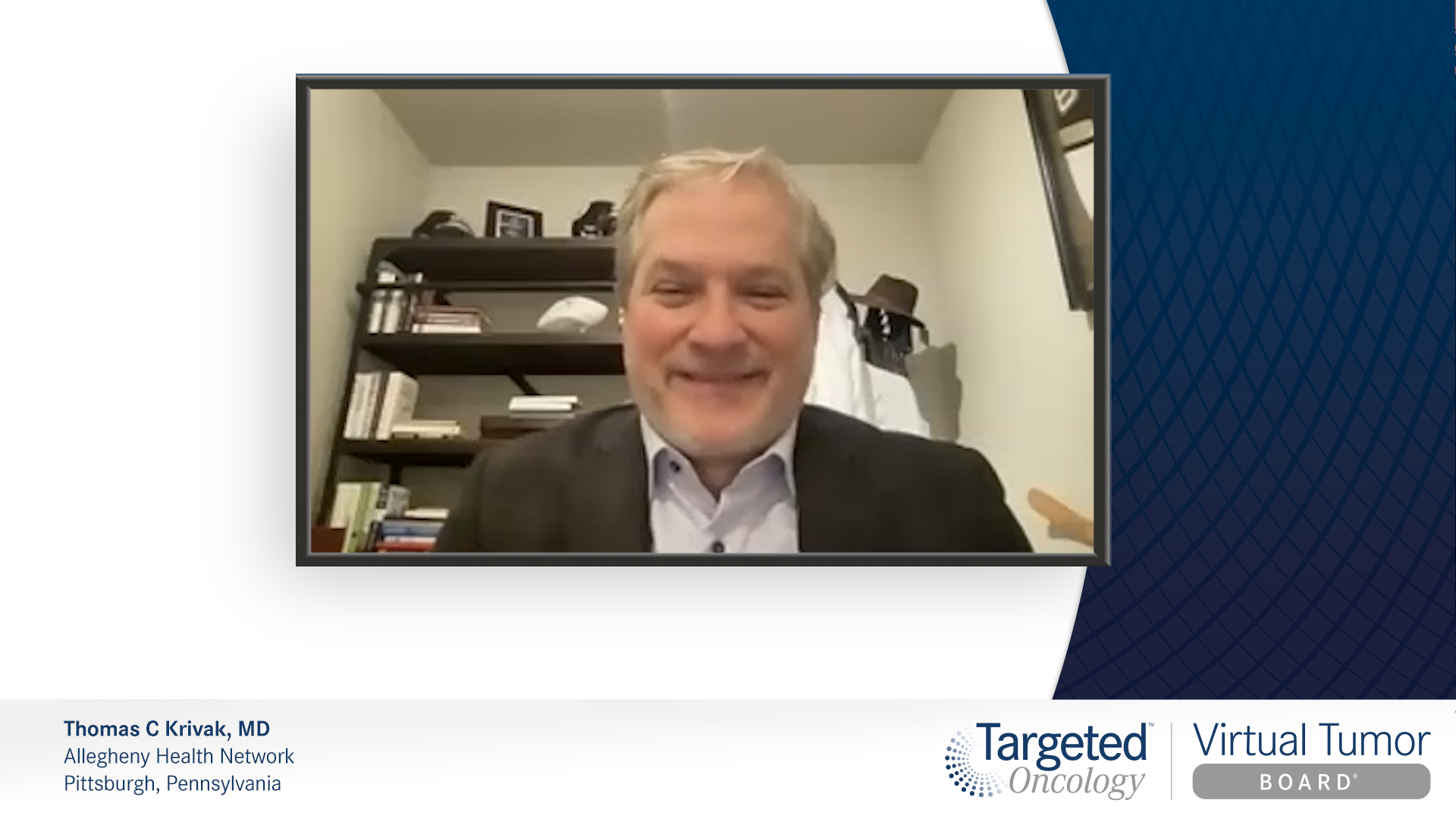 Thomas C. Krivak, MD: I loved the discussion, and we talked about a lot of those trials. This is a slide of Dr. Westin from MD Anderson [MD Anderson Cancer Center, Houston, Texas] and we thank him. It’s a nice summary slide. GOG-0218, ICON7 paved the way using bevacizumab [Avastin]SOLO1, Dr. Katie Moore [Kathleen N. Moore, The Stephenson Cancer Center, The University of Oklahoma] to do this trial, and it was a pivotal trial involving patients with initial ovarian cancer, BRCA mutated, somatic and germline, the majority of them were germline; and then obviously PRIMA and PAOLA trying to extend this indication. We addressed all of these issues as we went through our recommendations. This slide highlights some of the similarities, but the differences, and Dr. Chan, you mentioned that the PRIMA population is different from the SOLO population. You see stage III, stage IV is different, optimal, suboptimal is going to be different. I look at PAOLA, and for some reason, I don’t know why, but PAOLA, this 70/30, the number of optimal, the interval doublings, even this 7% without surgery. We’ve always said we operate on everyone, operate on everyone, and sometimes I go back, and I start thinking so really? I don’t think I’ll operate on everyone. I think I operate on anyone who I think will do well with surgery. I operate on people who I think will do well with surgery that sometimes doesn’t go well. But when I think they’re not going to do well, I usually don’t. Ashley laughs because she thinks it’s 1 in 1000. But I think we don’t operate on some patients, and I think PRIMA and PAOLA are very nice and what we see at the clinic.

SOLO is a nice select population that shows us and helped pave the way for the development of the initial PARP therapy, and obviously there will be more clinical trials that we’ll talk about later and what’s coming up here. You can see the differences, 0218 was run-and-gun, they went back and they retrospectively looked at homologous recombination repaired genes, and again SOLO-1 was a complete or partial germline and somatic response. PRIMA was all-comers, then PAOLA was all-comers, but the FDA [Food and Drug Administration] the indication is for patients deficient in homologous recombination. This is a nice summary slide that shows some of the similarities but differences, shows some of the differences in timing for how long maintenance therapy is used, and again how we need to digest this information and apply to each patient.

Again, looking at some of the PFS [progression-free survival] and risk reports. These are simply huge. When you watch SOLO-1, with a hazard ratio of 0.33, and you watch this BRCA1 and [BRCA]2 mutation column, the hazard ratio is 0.33; PRIMA, 0.4; PAOLA, 0.33 again; PAOLA having an active comparator, olaparib [Lynparza]/bev [bevacizumab (Avastin)] versus bevacizumab alone, and again SOLO and PRIMA have different patient populations. But looking at competent homologous recombination, which Dr. Chan had discussed before, these patients certainly do worse. You can see in PRIMA that if you were placed on maintenance treatment with placebo, you would become almost platinum resistant. Again, some of these patients started treatment a month, 2 months, 3 months later, so their treatment-free interval, their platinum-free interval, can be between 6 and 9 months. But if you were treated without any type of maintenance, you were going to potentially have platinum resistance.

But, again, when you look at these risk reports, they’re all very strong and favor maintenance treatment. Looking at PAOLA-1, where it didn’t get the FDA indication, had 0.92 at 16.9 versus 16 months in the HRP [homologous recombination proficiency] population. I must say that I was a little surprised by this. I don’t know what the panel thinks of that result there, but I was a little surprised that it wasn’t positive a few years ago when we saw this presented at ESMO [European Society for Medical Oncology]. Any thoughts on those deltas or hazard ratios or anything between those 3 tries? Again, we sort of talked about all of this while we were reviewing the treatment plan for the patient with BRCA2 mutation.

Cecelia H. Boardman, MD: As you said, Tom, the data is so overwhelmingly in favor of a certain type of maintenance therapy that I really think that’s the standard of care that we provide to the patient and discuss it. Obviously we don’t impose a treatment, the patient has to make that choice, but I think it’s changed the face of what we’re doing and really looking to try and extend that window without a platinum. I like this small cohort of patients in PRIMA, the HRD [homologous recombination deficiency] negative patients or the HRP population, and maintenance of platinum sensitivity is important. For me, this is a patient population where I will be looking at niraparib [Zejula]. I would tell you that I’m not surprised by PAOLA-1 and the HRP population, and I think it goes back to the PRIMA data, but also, honestly, to the pharmacokinetics of the drug. Niraparib has a longer half-life. It has a higher tissue distribution. In my mind, maybe it’s pharmacokinetics that explains why you see this difference with PRIMA, but you don’t see it in PAOLA-1 in the HRP population. It’s not the same drug.

John K. Chan, MD: I like what you said, Tom, about risk reports. Looking at this slide that you show us here, you have a hazard ratio of 0.3. We’ve never seen that, never, in our ovarian cancer trials, whether you’re looking at GOG-0218, you’re looking at our intraperitoneal trials that we know very well. All of this is positive. Even when we brought taxanes on board, right, to the medical oncology community, we never saw risk reports like this. It is interesting to note that even in the BRCA– positive breast cancer, prostate cancer, pancreatic cancer, they don’t see these benefits. Our tumors simply outperform them in terms of performance after exposure to these PARP inhibitors. Not offering these drugs to our patients is a shame. These patients, especially BRCA1 and even HRD-positive patients, should benefit from these maintenance strategies. The competent group, I can see where there needs to be a discussion between patients and providers.

But I think of it this way. I like what Cecelia said in regards to the fact that even if you don’t get a big delta of difference in the HR competent group, these patients, you move them from the platinum resistance class to the platinum-sensitive class, not that these drugs make these tumors more sensitive, that’s not what we’re saying here. What we’re saying is when you pushed those patients from a category majority, on the right, the median of 5 months to 8 months, say in the HR proficient group in the PRIMA study, you got them brought into a platinum-sensitive category, where you can offer them platinum again, where you can actually give them a doublet and Avastin, like OCEANS or GOG-0213. For those patients, you are giving them the opportunity to be re-exposed to platinum and hopefully get a longer response, more response, and longer duration of response.

Thomas C. Krivak, MD: This is also a good point. This is truly impressive data, and again, it’s hard to digest all of this while we’re going through this. Again, I look at this and I always say, I know we’re always talking about SOLO, and I think SOLO-1 is important, but in this patient who had a BRCA2 mutation, niraparib remains a viable option. I still think niraparib went after the hard-to-treat ones, looking at QUADRA, looking at NOVA, how they’ve diversified into the HRP population there. For me, I always think that olaparib or BRCA1 and BRCA2 mutations, but we also have to give credit to niraparib. They also have a strong risk ratio within this subgroup and don’t just think of them for HRP patients as well. But, again, that’s huge data and it’s great to have these discussions, and I’m sure the ongoing clinical development of these drugs and combos, we’ll have great data to look at again.

We talked about the side effect profile. Again, I think it was good that Dr. Boardman said, let’s look at the anemia and we could switch to niraparib and go back and forth. But what you can see is that you have nausea and vomiting, fatigue with olaparib. When you look at niraparib, you have some anemia, some thrombocytopenia. And then the olaparib/bevacizumab combination a little more hypertension. But there seems to be a little difference in the side effect profile, and again how we can start on a drug and want to keep it for the duration, if we have to switch to another drug, that tells us that we can do that because some of the differences in terms of adverse effects.

We all know the side effects of these drugs, and just as Ashley mentioned, we’re developing protocols to help manage side effects, nausea, vomiting, diarrhea, fatigue, that sort of thing, and Release of these drugs in clinical utility for the past 5-6 years has helped a lot.