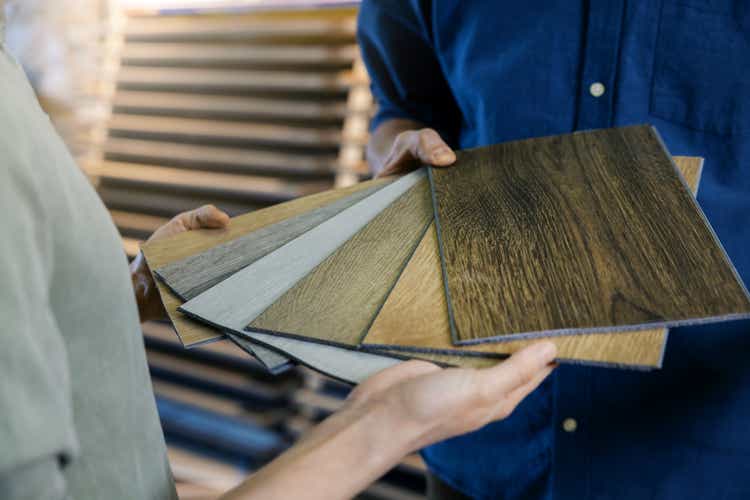 Mohawk Industries: Where is the ground? (NYSE: MHK)

Mohawk Industries (MHK) hasn’t surfaced on my radar lately as my last view of the company was in early 2015 after I called for a caution after the shares had a huge run. Fast forward seven years in time, stocks lost ground as the company’s valuation was further reduced. Despite the short-term uncertainty, I see long-term appeal here.

Mohawk announced the purchase of IVC Group in early 2015, as part of a deal to create a more dominant player in the global flooring market. The $1.2 billion purchase of Belgian company IVC would add some $700 million in sales to Mohawk’s business, with IVC being acquired at a multiple of 1.7 times sales.

The market took the news as good news, with shares gaining 5% on news of the deal. The shares fell to $168 at that time, while fast forwarding some 7 years from that point, the shares are actually down about 10%, currently trading in the hands of about $150 per share.

Looking at all of Mohawk at the time, the company generated $7.8 billion in sales on a rolling basis as the IVC deal was expected to add about 10% to reported revenue growth. Mohawk posted EBITDA of around $1.05 billion, for margins of around 13%, as the deal with IVC would likely add over a hundred million on that metric as well.

I pegged the pro forma net debt load at $3.3 billion, but with pro forma EBITDA coming in at just over $1.1 billion, I thought the leverage would be about 2, 8 times EBITDA. Based on the pro forma situation, the company’s equity was trading at around 19 times earnings.

Looking at past history, I thought Mohawk was a serial underperformer with pro forma sales hitting similar sales to what they did a decade prior just before the financial crisis. Given the full multiple at 19 times earnings, while the leverage would increase a bit, I was cautious after posting solid returns, up 30% in just a few months.

Since my take on the company at $170 in early 2015, the shares have actually been on a tear, which I didn’t suspect at all. Shares continued to rally and almost doubled to hit the $300 mark at the end of 2017.

In early 2018, the company released its 2017 results as revenue hit $9.5 billion, about $1 billion ahead of pro forma 2015 results when the deal was announced. Operating income of $1.35 billion was very strong, with net income of $972 million translating to earnings of $13 per share, ahead of my 2015 estimates. Net debt was to $2.7 billion, slightly down, as strong operating performance drove EBITDA of $1.8 billion, translating into a debt-to-equity ratio of just 1.4x.

Stocks took a huge plunge in 2018 as they ended the year at just $125 per share, down about 60% from the previous year’s highs. This despite sales that only exceed a few million dollars of the 10 billion dollar mark. Operating profits fell to $1.10 billion amid inflationary pressure, with earnings per share falling to $11.50 per share.

Revenues were flat at $10 billion in 2019, with operating profits falling further to $827 million, not only inflationary pressures kicked in, but tariffs are also impacting the business. Earnings held up well at $10.30 per share, largely due to lower tax rates and some buyback activity as well. Net debt was $2.4 billion, but EBITDA also fell to $1.5 billion, resulting in a 1.6x leverage ratio before the pandemic. This level and short-term debt caused stocks to fall to the $50 mark amid the outbreak of the pandemic.

Despite the pandemic, Mohawk managed to limit the full-year sales decline to around 5%, with revenue reported at $9.5 billion while operating profits fell further to $636 million and profit per share to $7.24 per share in ongoing buybacks. While these results, particularly on the margin front, marked the third year of flat performance, we saw improvements throughout the year as net debt was further reduced to $2.0 billion.

The issue relates to the near-term outlook as the company faces issues related to material availability, inflationary pressures and rising energy prices, among others, while higher interest rates could also harm the housing market to some extent. Fourth quarter earnings are estimated at $2.80 – $2.90 amid these trends, below the current rate, but still quite reasonable at $11 per share on an annualized basis.

If we look back since 2015, we’ve seen stocks go down a bit, but overall valuations have come down a bit more. In 2015, the company’s value was $15.7 billion, while it currently stands at $11.3 billion. This marks a much larger valuation pullback as the company has seen some growth with sales still hovering around the $10 billion mark, although the near-term margin picture is a bit uncertain, of course.

As a leading flooring manufacturer, with exposure to all categories: ceramic, carpet, laminate, wood, LVT, vinyl, etc., the company has the flexibility to switch between product categories depending on their availability and the inflation of input costs.

This is heartening as the company faces challenging near-term operating dynamics. While this will no doubt make 2022 a tough year, long-term multi-year valuations look particularly attractive here amid rapidly diminishing leverage.

It further allows for some buybacks as the timing to get involved here might be a little early with bad news likely to prevail in the short term but the long term potential of the business is what makes a long term allocation definitely useful here, for those with above average risk tolerance.