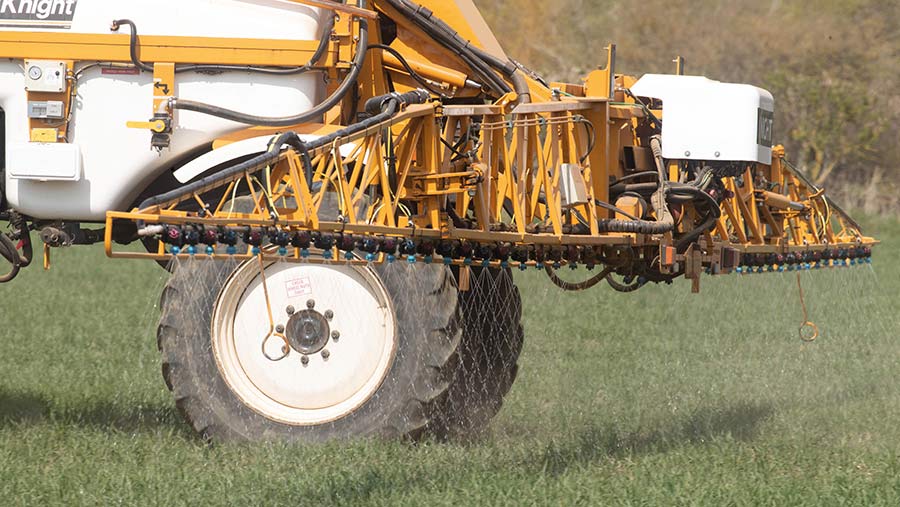 Reducing inputs and costs is a common goal for growers taking their first steps into regenerative agriculture.

As this is a systems approach, the first step is to build soils that are healthier, more resilient and full of organic life.

These soils will then begin to recycle nutrients to feed plants, as well as cope with extreme weather events.

See also: On-farm trial of biofungicides: what it means for septoria control

Basic applications of phosphorus (P) and potassium (K) are usually among the first to drop, but the current economic climate and recent price hike means there is huge interest in reducing nitrogen levels as well. (NOT).

At nitrogen rates above 180kg/ha, pursuing a regenerative approach becomes more difficult and relies more on chemistry, something farmers like Tom Sewell of Kent, current Soil Farmer of the Year, wish to avoid.

“The link between fungicide and fertilizer use is strong,” he says. “When nitrogen is reduced, plants become less vulnerable to attack and fungicides can also be reduced. They work together – it’s not an overnight process.

Nitrogen fertilizers can affect the carbon to nitrogen (C:N) ratio that soil bacteria need to thrive, increasing their need for carbon, which they find in organic matter to the detriment of soil health.

Applying nitrogen with a carbon source, such as molasses, will help. It maintains the C:N ratio, protects the soil and helps retain nitrogen in the root zone until it is absorbed.

The use of humic and fulvic acid with nitrogen applications is also often practiced, for their role in increasing nitrogen use efficiency.

Insecticides are another early target of regenerative systems. With a limited number of products on the market and increasing resistance levels among pests, their use is often ineffective.

weekly farmers spoke to two growers who are reducing their use of inputs – one who describes himself as a beginner, the other who is more experienced:

Northampton Monitor Farm host Rick Davies has begun his regenerative journey but freely admits it has been hard to change.

He has saved on herbicides and insecticides, as well as phosphorus and potassium, but feels nitrogen reductions are still beyond his reach.

Despite everything, he wonders what he does on a daily basis.

Mr Davies has been using strip tillage since 2012 at Newton Lodge Farms, making around 500 tonnes of his own compost, spreading sewage cake annually and incorporating cover crops where possible.

As a result, soil organic matter levels have increased, its soil’s water holding capacity and drought tolerance have improved, and some inputs are reduced.

“Soil microbial activity contributes to the availability of micronutrients,” he says. “We are less dependent on chemicals than we used to be and our net margins have improved.”

Fungicide costs in wheat are £80-90/ha, herbicide expenditure has fallen from £60/ha to £10/ha as chemicals have been replaced by hand rogueing and the use of bagged fertilizer decreases.

A barley yellow dwarf virus insecticide was applied to wheat planted early last year, but none is being used on its beans and efforts are being made to support beneficial insect populations.

His plans for the future include introducing more species diversity to his cover crops, importing more nutrient/soil organic matter, and making better use of sheep, as he continues. to progress.

Input use has dropped dramatically since Shropshire farm manager Michael Kavanagh took on the challenge of building a profitable and sustainable business seven years ago.

After making incremental changes each year to the 200 ha of arable crop produced at Church Farm, he used only one fungicide on his winter wheat last year and nitrogen use fell to 165 kg/ha.

All of its crops are established with no tillage and no seed treatment, insecticides, plant growth regulators or phosphorus and potassium fertilizers are applied to winter wheat, oats, spring barley, rapeseed and cultivated quinoa.

Not content to stop there, Kavanagh is determined to reach his goal of zero fungicide and will continue to look for ways to reduce nitrogen use – with foliar nitrogen and white clover being tested this year.

It is also experimenting with a mix of four-way milling varieties and Heritage wheat, while hoping to make progress in monetizing carbon and biodiversity.

“It’s a hot topic right now,” he admits. “This farm exceeds net zero by 500 to 750 tonnes of carbon per year, so we are busy gathering all the facts and figures to back that up.”

The starting point of his journey – in 2015 – was the purchase of a Claydon seeder and the establishment of an extensively managed sheep business, which has since been integrated into the farms.

The next big step was changing agronomists, Kavanagh recalls.

“Upgrading to an Eadaphos agronomist in 2016, I began to be challenged and encouraged to do more to develop an organic system based on soil health.”

As a result, cover crops were introduced and emphasis was placed on nutrition, to keep the plants healthy and able to withstand attacks from pests and diseases.

The use of organic products has started, so that the microbes in the soil can work well and a gradual reduction in nitrogen inputs can be put in place.

“It’s a balancing act and it continues to be a challenge,” he admits.

“Organic matter is essential for soil microbes, so my goal has always been to increase soil organic matter levels and have made good use of mud for this purpose.”

The expansion of the rotation took place in 2018, with the introduction of beans and quinoa. The latter proved tricky, but he persevered and his quinoa yields are now around 1.5 t/ha.

The following year he managed to finish all the lambs without using concentrates, while 2020 was his first harvest of all established crops without the use of tillage.

In 2021, he reached an agreement on a straw-for-mud deal, which will allow him to focus on soil biology.

In an effort to completely eliminate fungicides, silicon is put to good use for plant health and a suitable nutritional package is applied to crops based on tissue test results.

He also uses an organic brew containing six types of bacteria every time he walks through the crops, so his T3 ‘treatment’ costs just £1.50/ha.

Nitrogen levels have been reduced by including Nurture N with its liquid urea/ammonium nitrate, which contains fermented molasses as well as humic and fulvic acid.

These help to limit leaching and improve nitrogen use efficiency, reducing rates by up to a third.

This year he will try foliar-applied amide nitrogen, which is up to 90% effective, and plans to apply only the first 30 kg of his winter wheat to the soil.

Wheat yields reached 10t/ha after quinoa and, except for spring barley, all gross margins from his crops exceed £1,000/ha.

This is the third article in a five-part series on how to introduce regenerative agriculture. Other items include building carbon-rich soils, designing a diverse ration, reducing your reliance on the box/bag, and introducing livestock to the system.