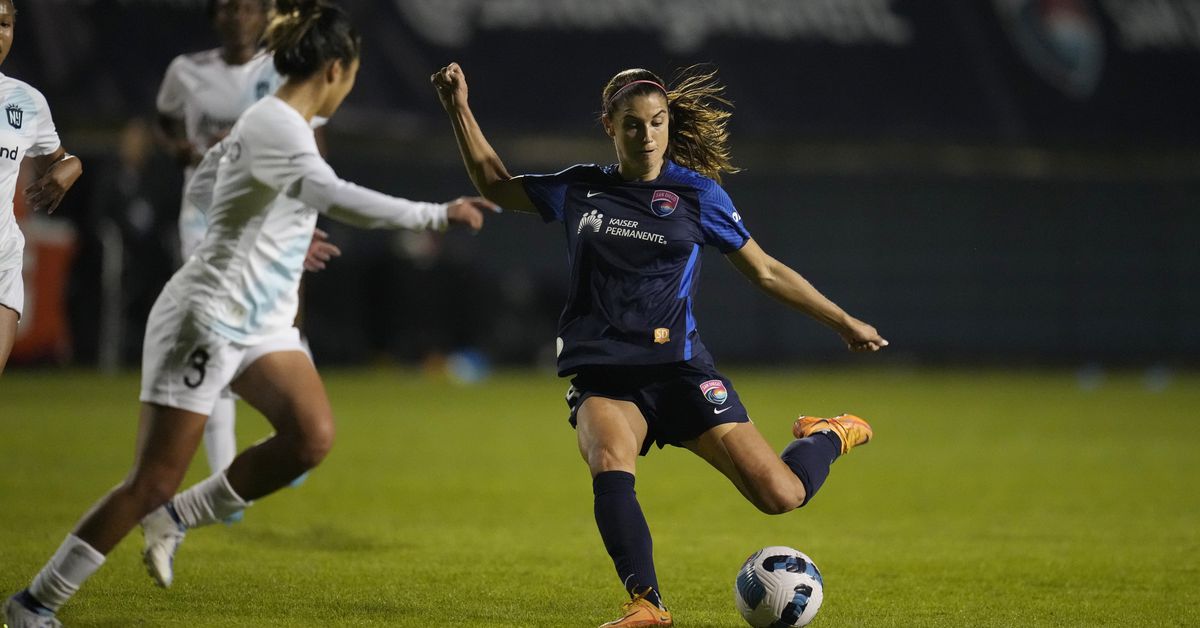 The San Diego Wave FC followed up their victory against the Houston Dash beating Gotham FC at home. The team crushed Gotham 4-0 in front of a crowd of 5,000 and broke several records in the process. It was a truly memorable performance from the team and the perfect way to christen their homecoming.

Here’s a breakdown of how the wave was able to win this game.

San Diego lined up in a 4-2-3-1 and maintained that form for most of the game. Even with the substitutions of players like Kaleigh Riehl and Kelsey Turnbow in the game, they haven’t lost their form. Gotham, on the other hand, started in a 4-3-3 formation but eventually changed to 4-2-3-1 around the 61st minute. This may have been done to mirror the shape of the wave and cancel them out.

This maneuver, however, did not work for the East Coast side as they ended up conceding three goals in the second half.

The match started with Gotham kicking off in the center half of the pitch. They would also have the first chance of the game as Midge Purce had a shot on target in the first minute of the game. His shot went over the bar.

After conceding a corner to their guests in the second minute, San Diego would eventually turn things around and get their first chance of the game two minutes later. Jodie Taylor directed a shot on goal but it was cleared off the line by Kristie Mewis. Despite this failed attempt, San Diego would gradually take over.

One of the ways they did that was to pressure Gotham in midfield. The wave used high pressure and used a keen sense of positional awareness to intercept his opponent’s passes. They would then move the ball quickly uphill to begin an attacking sequence.

Although Gotham also tried to employ high pressure and move the ball faster, San Diego remained calm and dictated the tempo. They would avoid their opponent’s attempts to press them by moving the ball from side to side. The wave would also go around the middle sending long balls over its attackers.

During the few times Gotham was able to get the ball back and launch a counterattack, the wave defense was smothering those attacks. In particular, goalkeeper Kailen Sheridan was one of the heroines of the match, as she made four crucial saves. Sheridan played a pivotal role in the surge by keeping back-to-back clean sheets in their first two games.

San Diego’s defense would continue to hold up, despite the loss of its captain, Abby Dahlkemper, to injury. Kaleigh Riehl took over as defender in the 35th minute. What helped the wave in its ability to maintain defensive stability was how Gotham’s formation unwittingly benefited the team. Due to the absence of key players like Allie Long (who is on maternity leave) and the non-replacement of Carli Lloyd after her retirement, the New Jersey team had to find some solutions to these problems. One of the ways they did this was to employ Mewis as a false nine and drop her deep into midfield.

However, each time she did, Gotham would lose her form as she moved forward. The wave also nullified Zerboni by forcing her into awkward places on the pitch which would prevent her from making passes. This would allow the team to collect the ball and then throw it forward. San Diego kept Gotham stuck in their back half and didn’t allow them to turn around and get out of the zone.

San Diego also neutralized Mewis and Nahomi Kawasumi in the middle and did not allow them to settle on the ball. This would prevent the duo from creating many scoring chances for their side. While the wave managed to use its press to cancel its guests, Gotham’s big Achilles heel was its lack of communication. Whether it was a lack of clarity on which defender would clear the ball and being disorganized at the back, or Midge Purce and Ifeoma Onumonu not being on the same page for Gotham’s best chance half-time, the lack of communication would prove costly for them. .

Around the 12th minute of the game, you can hear Gotham coach Scott Parkinson telling his team to “get organized”. Parkison had good reason for this, as the lack of defensive organization at the back would allow San Diego to outrun their guests at a 31-8 ratio, with 17 of those shots coming inside the box. 14 of these 31 shots were taken by Alex Morgan.

One of the ways San Diego was able to achieve this was by overloading the box. The wave would overload his opponent’s 18-yard zone with numbers and crosses in the zone. These twin maneuvers would overwhelm their opponents and allow the wave to take 17 shots in one half.

Despite all their scoring chances, the wave couldn’t find a breakthrough. Their frustration was further compounded when Caprice Dydasco blocked Taylor Kornieck’s shot in the 36th minute. However, it wouldn’t take long for them to end up on the scoresheet.

As the half drew to a close, Onumonu conceded a penalty by handling the ball in front of goal. Alex Morgan would then step in to take the kick, which she then scored. The first half would end and San Diego would enter the locker room with a 1-0 lead.

After halftime, the wave would pick up where it left off. The main difference between the two halves was the introduction of the team’s “game changers” in the second half. Kelsey Turnbow and Amirah Ali were both substituted in the game in the 64th minute, replacing Taylor and Jakobsson. Substituting Ali would prove crucial as, shortly after being sent off, the creative striker would win a penalty after being fouled by Zerboni inside the box. Once again, it was Morgan who stepped up and transformed it (66th).

Turnbow would ultimately be the team’s most advanced player as she took Taylor’s place in the roster. Kornieck would then occupy the space behind her to provide defensive cover. Eventually, Katie Johnson was substituted in the game in the 81st minute, and she would take Kornieck’s place as the player behind the lone striker. Alex Morgan then moved into a more central role and became the pivot of their attack.

The formation change would suit Morgan particularly well, as the striker would score two more goals before the end of the game. After forcing Zerboni into a turnover, Morgan would get his hat-trick in the 70th minute. She then continued by scoring a fourth goal in added time (90’+1′).

Shortly after, the ref would blow his whistle full time and San Diego would emerge victorious from this contest. They would also be history makers as they broke several records along the way. San Diego would be the first expansion team to win back-to-back games and keep two clean sheets. Alex Morgan would also be the first player to score a hat-trick for an expansion team in his debut season and only the third player to NWSL history of scoring four goals in a single match.

It was truly a monumental evening for them and a night they will never forget.

Unsurprisingly, the wave dominated possession. They had the ball 56% of the time and even had it up to 60% of the time in the first half. Dominating wave possession not only allowed them to create their own chances, but also kept Gotham from developing their offense. And it worked effectively.

San Diego also hit more crosses into the box than their opponents. According to Wyscout, the wave had 31 crosses of which 13 connected with their targets. Tegan McGrady was the most successful and accurate cruiser in the wave, as she had six the entire game.

Passing cards for both teams showed how effective the wave was at moving the ball. This chart from Wyscout shows how San Diego was able to utilize more of the width of the field with their passing combinations. Complex pass combinations between players are the reason the wave was able to create so many scoring opportunities.

Gotham, on the other hand, had much shorter passing combinations. This is mainly due to the wave cutting off its overtaking channels and causing the team to make mistakes. With that in mind, it’s safe to say that San Diego executed their game plan pretty well, as they got the desired result.

All in all, it was a truly remarkable performance from the team and a glimpse of what the team is truly capable of. This team has a high ceiling and it will be absolutely exciting to see them reach their potential.

The Wave will play the Chicago Red Stars at home. The game will take place this Sunday and kick-off time will be at 2:00 p.m. PDT. You will be able to watch the match on Twitch (international viewers only) and on Paramount+ domestically.

So what do you think? Leave a comment below.

Trial of a preferential phosphodiesterase 4B inhibitor for idiopathic pulmonary fibrosis