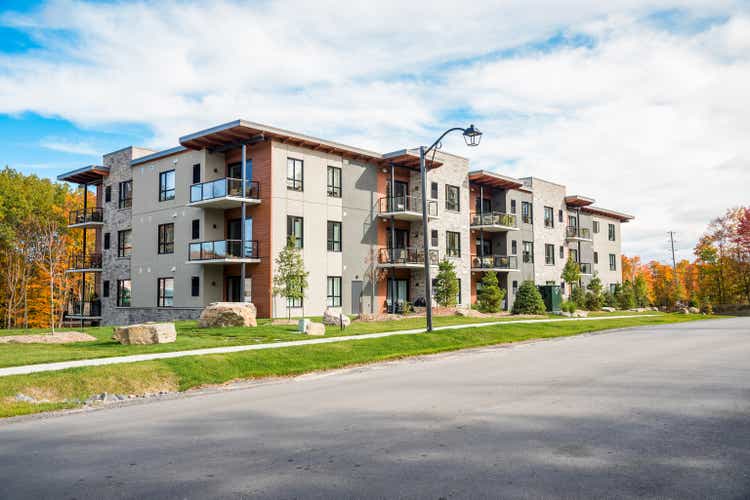 Several Seeking Alpha articles have already discussed how low the current market price is compared to the book value of Vonovia (OTCPK:VNNVF), so just a quick recap. (All figures are in euros, with B for billions and M for millions. Data I use come from the materials of the public company, mainly the Presentation 2Q2022 and the Report 2Q2022.)

It really looks attractive. However, the gross rental yield of the buildings at book value is only 3.5% and at market value around 2.8%. That’s shockingly low, but consistent with the zero interest rate policies of the past decade (Vonovia’s average interest rate on its debt is just 1.2%). There are two other major factors at play:

Let’s look at some other financial data. The issue here is that Vonovia has been a serial acquirer for the past decade, so the financials change a lot, including a major change since the acquisition of Deutsche Wohnen in 2021. So I’ll take the numbers from 1H2022 and multiply them by 2 to obtain an annual execution rate.

Reported EBITDA does not include income net of fair value gains on properties, so it reasonably reflects recurring cash flows. (Vonovia is also a large real estate developer, but 80% of EBITDA comes from the rental segment.) The calculation of interest expense is quite complicated due to interest rate derivatives and other elements (see p. 17 in the Q2 presentation). Expensed maintenance is included in EBITDA, but capitalized maintenance is not, so instead of FFO, I prefer to look at AFFO (FFO minus capitalized maintenance). The dividend policy is 70% of FFO; currently, dividends represent approximately 72% of AFFOs.

Over the next 8 years, about 4 billion debts will come due each year. Since the debt structure is quite complex with all the interest rate hedging etc., I cannot determine the actual interest rates on refinanced bonds in any given year. Therefore, I assume that all outstanding bonds have an interest rate of 1.2%. The following table shows the annual increase in interest expense relative to the new interest rate at which the bond is refinanced.

We can see that the current dividend would only be sustainable up to an interest rate of 3-4%. My very rough estimate of the risk premium for Vonovia bonds is around 2%, and since German 10-year government bonds are already at 1.7%, it is obvious that something needs to be done. Management plans to sell properties worth 13 billion. With a loan to value ratio of 45%, we can expect the result to be around $7 billion in debt reduction and around $7 billion in equity proceeds. Let’s see what happens if all of this is used to pay off the debt due in 2023 and 2024.

Thus, the implementation of this plan results in the sustainability of the dividend for rates ranging up to 5-6%. If the 7 billion of share proceeds were instead used to buy back shares, this would buy around 1/3 of the company (at 25 eur/share), reducing the dividends paid by a third, or 400 million, which can be used to pay higher interest. This would lead to a sustainable dividend for rates up to 5-6%. This suggests there is indeed room for buybacks at current interest rates – they have a similar impact on cash flow (or dividend sustainability) as debt repayments. (Selling apartments at 1.3x NAV and buying back shares at 0.4x NAV is also very likely to generate significant gains.)

However, the 6% interest rate on Vonovia bonds is only something like a 4% risk-free rate. Although it is reasonable to assume that higher rates will only be accompanied by higher inflation, which will result in higher rents overtimeI’m glad management is exploring other options to reduce debt: they want to create joint ventures that would allow them to withdraw money from their assets tax-free.

Energy costs are rising across Europe and this could be a problem for some tenants. But it’s a problem for everyone, not just apartment renters. The strict regulations imposed on apartment rentals indicate that governments are very concerned about affordable housing, so I can’t imagine they wouldn’t do anything about the exorbitant prices of heating and electricity.

While some people might switch to shared accommodation to save on costs, apartments are in short supply in most cities, so Vonovia or its competitors won’t be much affected.

An unpleasant risk to keep in mind is a possible takeover. Vonovia is big, so it’s less likely than some of its smaller competitors. But I find the following scenario quite plausible: you buy shares for 25 eur/share, then the price temporarily drops to, say, 10% while the overall market only drops 20%, then a large alternative manager offers an offer of “above the market” 15 eur/share and privatizes Vonovia (for less than 15 B). Look what happened to STORE (STOR).

Editor’s Note: This article covers one or more microcap stocks. Please be aware of the risks associated with these actions.

Buy Golden Ocean and Star Bulk at their current prices